Roxgold Inc. reported in early April that construction was 84% complete at its high-grade Yaramoko gold project in western Burkina Faso and that the first gold pour was scheduled for June. Plant commissioning was under way, and ore development in the underground mine was progressing well on four levels. More than 23,000 metric tons (mt) of ore had been placed on the run-of-mine pad. 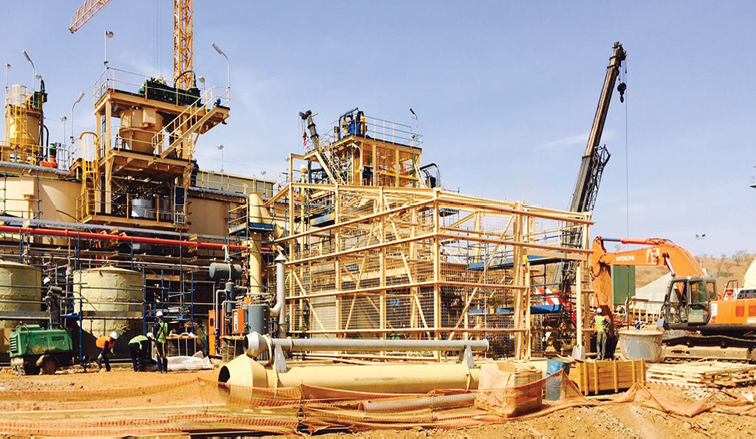 The Yaramoko project is designed to produce an average of 99,500 oz/y of gold over a mine life of 7.4 years. The plant, shown here during construction, has a nominal throughput capacity of 270,000 mt/y. (Photo: Roxgold Inc.)

As of the end of March, Roxgold had spent approximately $78 million on Yaramoko project development and expected to complete the project within its budget of $110.8 million.

The company said underground development is advancing well, with contractor African Underground Mining Services delivering better than expected development rates in ore and waste. As of early April, the access ramp had advanced to 610 m from the portal and opened up four levels for development of ore.

Endeavour said it is encouraged by what it has observed in the ore drives, with the orebody profile and thickness consistent with the block model. Initial face sampling of crosscuts indicates that ore grades are consistent with expectations. Stoping activities are scheduled to begin in the third quarter.

Roxgold has initiated an 11,000-m diamond drilling program, including resource definition and expansion drilling, with expectation that the results will be incorporated into an updated life-of-mine plan in late 2016.