Earlier this year, OZ Minerals announced it was undertaking a number of initiatives to improve the medium to long-term value of its Carrapateena copper assets. One of those initiatives was the progression of a Hydromet demonstration plant following successful testing of the process in 2014, to verify scalability to full production.

The company recently announced that the first trial results from the Hydromet demonstration plant indicate that the process is scalable and could yield copper-in-concentrate levels of more than 55%, with impurity elements below penalizable levels. This, said the company, compares favorably with globally produced concentrates with copper-in-concentrate grades that typically average less than 30%.

“This is a great set of first results for OZ Minerals and the copper industry in South Australia,” said Andrew Cole, CEO and managing director. “The successful completion of this demonstration trial will allow us to produce some of the best and cleanest copper concentrate in the world with virtually no impurities.”

Cole said the recent results carry over from the laboratory scale test work and pilot plant last year, where a final product exceeding 55% copper-in-concentrate was produced from a starting concentrate grade of 30%-35%. OZ said it has increased the trial capacity of the Hydromet demonstration plant by a factor of fifty. It also noted that the low copper and precious metals recovery loss during the process was comparable to traditional existing processing techniques. The aim of its trial work, it explained, is to prove that the process can be economically scaled up to a fully operational plant.

“On the back of these promising results, we will continue to feed samples of concentrate through the plant over the next few months to build on our technical understanding and confidence in the process,” Cole said. The results of the Hydromet demonstration plant trial will contribute to the ongoing studies in optimizing the value proposition for its Carrapateena operation in South Australia.

In support of its announced South Australian Copper Strategy, the state government has pledged A$10 million to fund a joint study of the Hyrdromet process between OZ Minerals and Orway Mineral Consultants, with research conducted by Adelaide University. OZ Minerals will contribute A$8 million to this work. Orway, with facilities in Toronto, Canada, and Perth, Australia, explains on its website that it has experience in leaching copper from low and high grade oxide deposits via heap leaching and tank leaching, as well as sulphide concentrate leaching via low and high temperature pressure oxidation process. Copper concentrate recovered to metal, via SX-EW or direct EW is the standard processing route; however, OMC also is involved in producing super concentrates from dirty concentrates with concomitant cleanup and removal of uranium, cobalt, arsenic and other deleterious elements from copper sulphide concentrates.

“This is crucial research that could help maximise the value of South Australia’s copper resources for generations to come. When considered in the context of the South Australian Copper Strategy, it is a very exciting time for the industry,” Cole said. 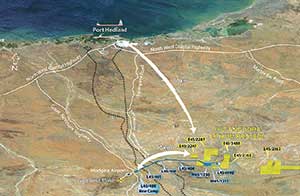