Blackham Resources has begun refurbishing the Wiluna gold plant on its Matilda gold project in central Western Australia and is targeting a production startup in the third quarter of 2016. The plant has been on care and maintenance since mid-2013. Blackham acquired it in March 2014. Blackham’s plan is to optimize existing plant components and upgrade the free-milling oxide carbon-in-pulp circuit to process current resources.

The Matilda gold project incorporates more than 780 km2 of tenements, including previously operated mines and numerous exploration prospects. All of the deposits are within 26 km of the Wiluna gold plant by existing haul roads.

A definitive feasibility study completed in February is based on a mining inventory of 8.3 million metric tons (mt) grading 2.9 g/mt of gold and containing 767,000 oz of gold. The inventory includes 6.1 million mt of reserves grading 2.5 g/mt and containing 481,000 oz. Initial mine life is planned at more than seven years, with production averaging 101,000 oz/y during the first five years.

Mining at the Matilda project will be undertaken by mining contractors, with Blackham personnel providing management and technical services. The project will operate as a fly in/fly out operation from Perth, with local residents em-
ployed where possible. Definitive feasibility study mine designs were completed on the main mining centers at Matilda, Galaxy, Williamson and Wiluna.

Open-pit mining is planned for Matilda, Williamson, and Galaxy and will utilize conventional drill, blast, load, and haul mining methods. Ore will be hauled by road train to the Wiluna gold plant.

Ore from the underground mines will be predominately extracted via top-down mechanized longhole open stoping, with a smaller amount mined by a bottom-up modified Avoca method using unconsolidated backfill. The majority of the underground ore is in the top 600 m and has a relatively short haul to surface.

BHP says the assessment ‘provides greater visibility of our potential environmental footprint over the next 50 to 100 years’ of mining activity in the Pilbara. 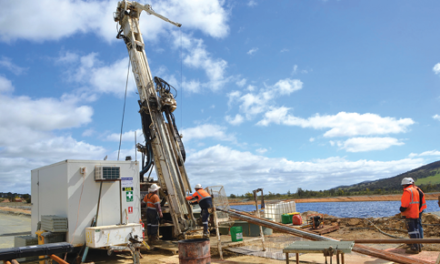