Atlas Iron held an official opening for its new Mount Webber direct-shipping-ore (DSO) iron-ore mine in the Pilbara region of Western Australia on July 15. Previously, Atlas has developed four relatively small DSO mines in the Pilbara: Pardoo, Wod-gina, Mount Dove and Abydos. The company’s first commercial ore shipment was from the Pardoo mine in December 2008. The company shipped 10.9 million mt in its fiscal year to June 30.

The Mt. Webber mine is located 230 km via road south-southeast of Port Hedland. Mining began in December 2013, and crushing and screening began in early June. Haulage of product to port began on July 18.

The initial production rate at Mount Webber is 3 million mt/y, which will ramp up to 6 million mt/y following commissioning of a second-phase expansion by the end of December. Ore is shipped from the Utah Point shipping facility at Port Hedland. The project currently is using conventional truck haulage to transport its production to port but has the potential to be included in any future rail agreement.

At the Mount Webber opening ceremony, Atlas Managing Director Ken Brinsden said the mine was one of the company’s lowest-cost developments, with capital efficiency of $35/mt/y of production and very competitive operating costs. 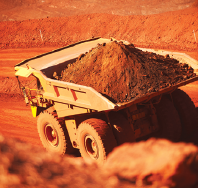