Siemens’ Industry Solutions Division has received an order from ThyssenKrupp Robins of Greenwood Village, Colorado, USA, to supply a gearless drive system for an overland conveyor at Xstrata Copper’s Antapaccay copper mine in Peru. The overland conveyor is being supplied by ThyssenKrupp and will transport ore over a distance of some 6.5 km from the mine to the processing plant. The belt will be 1,372 mm wide, travel at 6.2 m/sec, and is designed to transport approximately 5,260 tons of material per hour.

This will be the first installation of a gearless-drive conveyor system outside Germany, said Siemens, which expects the system to be commissioned in 2012.

The drive system for the overland conveyor comprises two low-speed synchronous motors, each with a total power of 3,800 kW, and Sinamics SL150 cycloconverters. Siemens claims the gearless drive solution has a number of advantages over the high-speed motors and gearboxes usually used on conveyor systems: The size of the motor is not limited by the size of gearbox available, thus eliminating the necessity to install multi-motor drives. The power required to drive a belt can be provided by just one drive per belt pulley. This enables the size of the electrical room to be reduced, saving space and weight. Elimination of a whole series of mechanical and electrical components increases the reliability and efficiency of the overall system by 3%-4%, and maintenance requirements are also substantially lower—according to Siemens, gearbox maintenance work alone can amount to as much as 5% annually of the original investment. Lubrication and gearbox cooling systems, and their maintenance, are also eliminated.

The first conveyor system equipped with gearless drives was installed in 1986 by Siemens and ThyssenKrupp (formerly O&K) at the Prosper-Haniel mine of Deutsche Steinkohle AG.

Xstrata Copper, based in Brisbane, Australia, is part of Xstrata plc and operates mines and production plants in Argentina, Australia, Chile, Canada and Peru. The company is the fourth largest copper producer in the world, with production capacity of almost 1 million tons per year. The Antapaccay copper mine in the south of Peru is Xstrata’s latest project. Starting in 2012, it is scheduled to produce some 160,000 mt/y of copper concentrate.

Siemens received an order in 2008 to supply the electrical equipment for three of the mine’s grinding mills, which also are equipped with gearless drive systems. 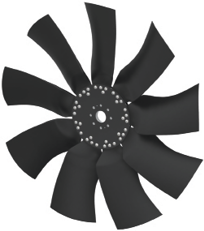