The newest waste heat recovery systems for diesel genset installations are based on conventional steam turbine technology, but at a smaller scale suitable for remote minesite applications.

With more than a dozen renewable energy projects announced over the past year or so, it’s clear that rising energy costs and potential savings from renewable-energy technologies are on the mining industry’s mind. As Mark Cutifani, CEO of Anglo American, pointed out in a speech given at Mining Indaba 2020 in January, the amount of energy required to produce 40 kg (88 lb) of copper has risen by a factor of 16 since 1900, while the industry is undergoing increasingly closer scrutiny of its energy, land and water usage practices.

Mining companies are spending money to save money. In the past few months:

• Anglo American Platinum CEO Chris Griffith announced that the company has applied to the South African government for approval to build a 75-MW solar power facility to serve its Mogalakwena mine.

• Rio Tinto approved a $98 million investment in a new solar plant at its Koodaideri mine in Western Australia, along with a lithium-ion battery energy storage system to help power its entire Pilbara power network. The 34-MW solar photo-voltaic plant is expected to supply all of Koodaideri’s electricity demand during peak solar power generation times and approximately 65% of the mine’s average electricity demand.

The plant, Rio Tinto’s first company-owned solar facility, will consist of an estimated 100,000 panels, covering an area of 105 ha (260 acres). Construction is expected to begin later this year, subject to government approvals, and is due to be completed in 2021. Complementing it will be a new 12-MWh battery energy storage system in Tom Price that will provide spinning reserve generating capacity to support a stable and reliable network. Rio Tinto Iron Ore Chief Executive Chris Salisbury said the company is investigating additional renewable energy options in the Pilbara, as well as other opportunities to reduce emissions across its global holdings.

• Resolute Gold’s Syama mining complex in southern Mali signed a contract with modular-power supply specialist Aggreko for a hybrid power plant that combines solar, battery and heavy fuel oil (HFO) technologies. Once the system is installed, Aggreko will operate and maintain a 40-MW thermal power plant and a 10-MW battery storage system, with a further 20 MW of solar power planned in 2023. The hybrid solution will reduce Syama’s power costs by an estimated 40%. By using a rental approach, Syama was able to de-risk its investment in greener energy by avoiding  the need to invest capital into the power solution.

Dr. Thomas Hillig, managing director of THEnergy, a Germany-based management consultancy specializing in clean-tech innovations, said that over the last few years, successful energy projects have bolstered confidence in solar- and wind-based renewable energy technology and independent power producers (IPPs) have started financing solar and wind plants at remote mining sites. IPPs sell electricity to miners on a power purchase agreement (PPA) basis. To mining companies, the PPA-cash flow is similar to what they are used to from diesel contracts, but it comes with cost reductions.

Hilig said advances in diesel genset efficiency optimization have also sparked interest. Diesel engines only convert 40% of fuel energy into electricity. However, waste heat recovery systems can reduce diesel consumption by approximately 7%. “Waste heat recovery is the low hanging fruit in the diesel reduction game,” Hillig said. “Renewables have recently opened the door for new approaches because they have increased the acceptance of more capital-intensive solutions in the mining industry.”

The newest waste heat recovery systems for diesel genset installations are based on conventional steam turbine technology, but at a smaller scale. According to Hillig, the approach has been proven in applications such as biogas engine heat recovery, biomass combustion, industrial waste heat and geothermal heat.

Hillig noted that Dutch manufacturer Triogen has developed a containerized “e-box” with potential benefits for remote mine sites. It is designed to allow easy upgrading of any diesel genset without changing its operations and thus without affecting maintenance or warranty requirements. The solution is based on conventional steam turbine technology, yet is fully automated, compact and simple to install. Two standard 20-ft shipping containers are connected to the exhaust gas stack of diesel gensets and the e-box generates electricity from the waste heat. The electricity is fed into the local grid, taking the place of energy normally provided by diesel gensets and thus cutting fuel consumption.

Triogen’s technology reportedly has accumulated more than 1 million operating hours, at 50 installations. The e-box solution has successfully been field-tested for mining applications and is now being deployed at the remote site of a blue-chip mining company. Henning von Barsewisch, CEO of Triogen, said: “Our containerized e-box has created sustained awareness from mining companies, IPPs, diesel genset OEMs and rental companies because of its short payback time of 2 years and its quick and easy deployability.”

Because the Triogen e-box converts waste heat, it is a zero-carbon technology, which addresses the drive for cleaner mining. The company claims a single e-box saves 300,000 liters of diesel per year — approximately the same as a 0.7-MW solar power plant in a sunny region — while annual CO2 reductions can amount to 800 tons per e-box.

Hexagon’s Mining division and the University of Arizona recently announced the launch of Mining 4.E, an online course designed to broaden the understanding of modern mining and its associated technologies.

The course will cover the complete mining cycle, from discovery to reclamation, as well as the innovation and technology spurring improvements at each step. Participants will learn about the overriding importance of safety in all aspects of mining and the radical changes in mining and processing methods that are expected to reshape the industry over the next 20 years.

University of Arizona professor and head of Department Mining and Geological Engineering, John Kemeny, said, “Students can expect to achieve a solid understanding of the mining cycle and its associated steps, including ore deposits, mine valuation and economics, planning and design, operations, and safety and risk management.

“All of this will be presented through a 4.0 lens for context and perspective on the industry’s direction.” 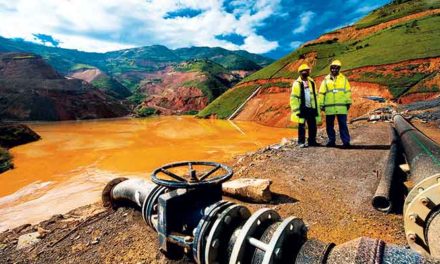 Gravity Flow vs. Pumped Systems: Are You Overspending on Pipes and Pumps?