Two studies from last year showed the viability of digital twins for use in maintenance planning. Both offered theories that could prove useful to maintenance planners and personnel. Both also said more real-world data is needed to build better models for use in future studies.

A study1 from Finland assessed a digital twin at optimizing maintenance scheduling to maximize profits. The digital twin consisted of two models. The first was an operations and maintenance (O&M) model. The outputs from it became inputs for the second, which was a cash-flow model.

The study showed that a fully informed digital twin could prove to be viable at optimizing maintenance policy to maximize profits for a real world mine, the author of the study said.

The initial data used to construct it could come from the original equipment manufacturers (OEMs). “OEMs have a leverage here as they have the highest amount of data that is required to develop robust failure probabilities on their equipment, and thus they could develop their pay-by-the-use-type business models for the mining operators,” said Jyrki Savolainen, postdoctoral researcher at Lappeenranta University of Technology. With that data built into the model, “preventive maintenance of trucks and shovels could be optimized by taking advantage of the continuously accumulating maintenance history data and sensor data.”

The study also highlighted the relative dearth of similar studies, and the importance that more be conducted.

“This type of maintenance optimization in mining is not very well studied, and only one or two literature sources exist to attain realistic-looking values as reference points for the statistical distributions used” in the O&M and cash flow models constructed, Savolainen said. “These in turn represent only a couple of case examples from real mines, and therefore the simulation results of this paper have only limited generalizability in practice.”

The O&M model replicated a load-and-haul process “using discrete event simulation in a Monte Carlo simulation experiment.” The elements in the simulation fell into two categories.

“The first is server-queue components, which include shovels, dumpsites or discharge points, and workshops,” the study said. “The second category is represented by agents, i.e., trucks for transportation of the excavated material around the mine.”

Random variables for the agents included the time to failure (TTF), the time to repair (TTR), and the transportation capacity. For the trucks, a time-based maintenance policy, as opposed to a conditions-based policy, was used.

“Shovels were modeled as server-queue objects with log-normal serving time distributions, and they presented the peculiar hallmark of unreliability,” the study said. “As in the real world, they were subject to the aging process, and they could unexpectedly fail or they could be preventively maintained,” it said. “Therefore, in addition to the serving time, shovels are characterized by a TTF probability density function.”

For the shovels, both time- and conditions-based policies were used. “Each shovel simply operates at its site until a failure occurs, or until it is sent to a workshop for preventative maintenance.”

Workshops were modeled using first-in-first-out logic for queue management. “When a maintenance intervention is due on a truck, a workshop processes the agent according to the type of maintenance needed and to the TTR distribution of the specific agent.”

Dumpsites and the mill were both assumed to operate without interruption.

To reduce complexity, the number of entities was minimized in the experiments. The number of unplanned downtimes was “optimized using a more complex genetic algorithm for search over a stochastic response surface.” 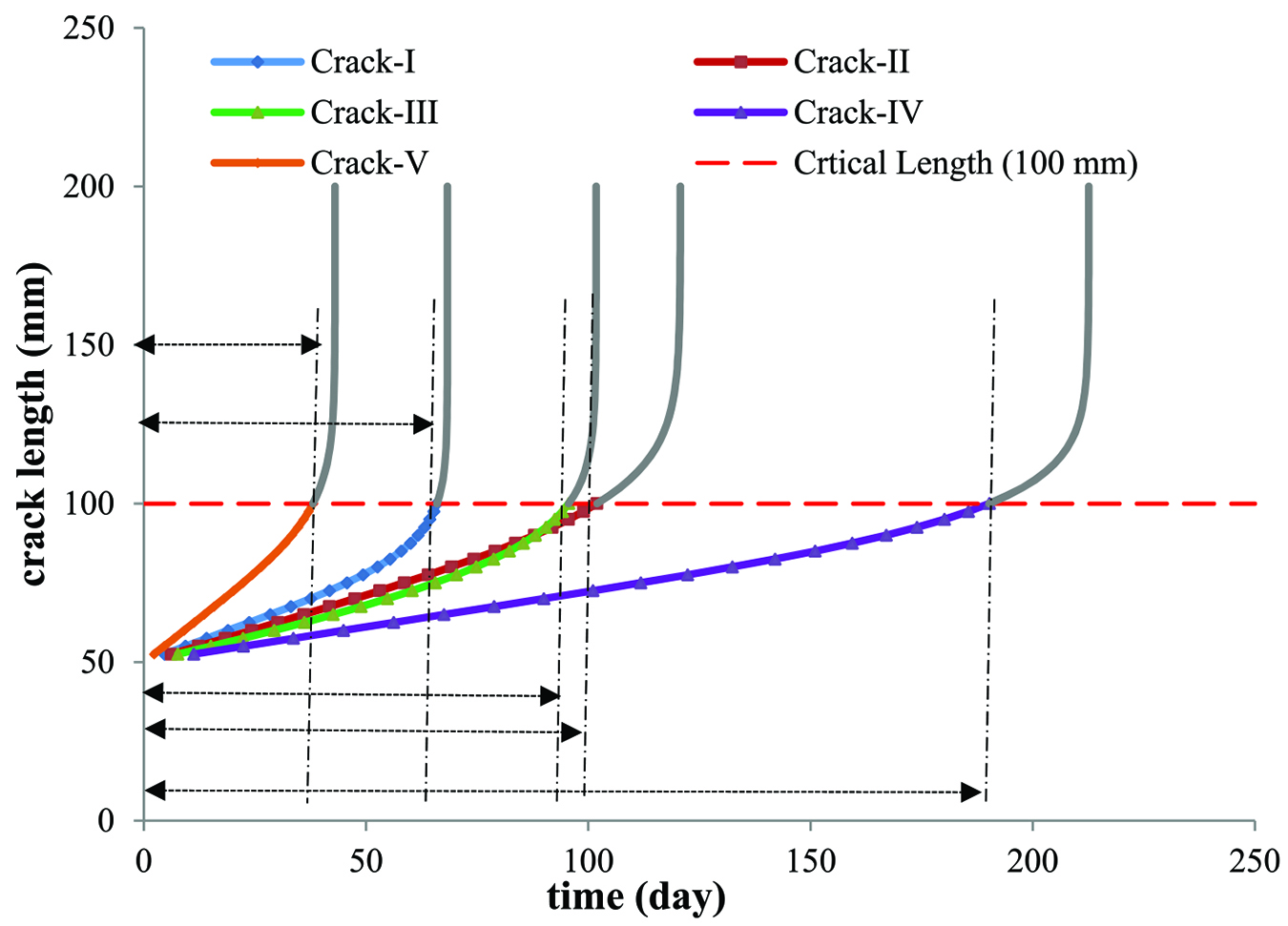 Crack growth rate curves show the critical length to be roughly 100 mm and to be reached as early as 38 days. (Image: Raza)

The O&M model is publicly available.

The model assumes the mill is either at full operation or is shut down according to a predefined production schedule.

Added variables included “the costs of equipment leasing, fuel costs derived based on the O&M model’s indicated operation hours, and other fixed costs such as buildings and administration,” the study said. “The output price of metal is updated weekly.”

The first experiment assumed maintenance costs to be fixed. It was designed “to screen all the possible system configurations that can be produced by 10 trucks, three shovels, and the maintenance policies.”

The three policies were max-corrective or run-to-failure; balanced; and max-preventative. “The balanced policy foresaw one preventative maintenance event per week of simulation.”

The simulation was run 10,000 times, and the best averages were assessed.

The experiment found that “the max-corrective policy was favored over the balanced option.” The max-preventative policy “produced negative profits in all cases.”

With the max preventative policy, excess queuing times at the workshop hindered the mine’s ability to maintain maximum throughput at the mill to achieve top revenues and profits.

Cost uncertainty was then introduced, but, to reduce unwanted complexity, cost averages were used. This arrived at “the previous suggested outcome, with no preventative maintenance.”

“I’m not sure if that’s possible in the real world because many of the maintenance events are corrective and there are times when the mining is in halt and a large part of the fleet might be available for maintenance at the same time,” he said. “Our simulation model looked at this issue from the perspective that one would continuously do the optimization of maintenance by calling in the pieces of equipment that are closest to the statistical failure.”

Nonetheless, the first experiment showed that “the run-to-failure policy is better than the maximum-maintenance policy,” he said, “yet it leaves open the possibility to optimize the maintenance threshold, which is addressed in the next experiment.”

For the second experiment, the age threshold, or the preventative maintenance interval, was set as a ratio. Weekly maintenance equals 1, and maintenance once every two weeks is 0.5. In the model, the interval “varies from 0.125 to 1, with a step size of 0.125,” the study said.

The digital twin suggested weekly maintenance would yield the most profits. “Maintenance policies with n ≥ 0.5 seem to deliver the best performances in terms of profitability and utilization, and furthermore, a positive relationship between the mill utilization and a high number of trucks exists.”

The study concluded that “in most cases, maximizing mill utilization and production throughput would yield the highest expected revenues.” Maintenance is a “necessary evil, with only little potential to the economic upside,” it said.

The digital twin showed that, in a perfect world, the best maintenance policy for maximizing profits is one that maximizes mill utilization. “From the theoretical economist’s perspective, one should aim to minimize the amount of preventative maintenance, as well as condition-based maintenance, because there is no upside cash flow potential in doing extra maintenance once the fleet size and configuration is fixed,” Savolainen said. “However, ignoring maintenance will put the cash flow in risk, which means that some way to seek for the optimal low-point would be desirable.”

For real world applications, the study showed the potential for digital twins to be used in maintenance policy optimization. “We constructed this system and it produced reasonable results within the limits of the given initial parameters,” Savolainen said. A stochastic simulation system, when connected with equipment maintenance data analysis, could be a viable “resource to optimize the amount of preventive maintenance,” he said. “If such a data analysis proves to be fruitful in uncovering recurring maintenance patterns, then simulation models as envisioned in this paper might become a reality in mining practice.”

A study2 from the Heavy Mining Machinery Research Laboratory team at the Missouri University of Science and Technology modeled cracks in a dipper on a virtual PH4100 XPC and found that cracks grow at a near-linear rate until a critical length is reached, at which point growth accelerates to failure.

The study found that, depending on where the crack is located, the critical length can be reached rapidly or slowly, showing the need to carefully monitor cracks after they have been discovered.

The author told E&MJ the shovel was virtual and therefore the specific findings might not be widely applicable. The study does, however, support the theory that cracks do not grow at equal rates, and that the rates depend on a number of factors.

Orientation is another factor driving crack growth rate, he said. “It is quite possible that a vertical crack would propagate more quickly than a horizontal crack.”

For example, “in our study, a vertical crack in the dipper side wall showed a higher propagation rate than a horizontal crack at the same location,” Raza said. “Similarly, the initial detected length of a crack is important as the crack propagates much more rapidly for longer cracks.”

For the study, a virtual dipper and shovel front-end assembly was built in ANSYS Workbench R15. Experiments were run “to investigate the crack-propagation of predefined cracks at the selected locations of the dipper in specific orientations,” the study said.

Initial crack lengths were modeled as knowns, such as welds or manufacturing defects, or unknowns caused by damage. “Predefined, semi-elliptical cracks were introduced,” the study said. The cracks varied in length, and depth was a function of length.

The parameters for crack growth included crack geometry, shape, orientation and stresses. The locations of the cracks included “highly stressed dipper regions, the centers of sidewalls and bottom plates,” the study said.

Theoretically, cracks have three phases: initiation, growth and rapid growth to failure. “Any distinction between the initial two phases is nearly impossible to make,” the study said. The growth phase is the longest.

The study found that there is a point that separates the second and third phase. The point is a critical length that, when reached, “the material behavior becomes plastic at the crack-tip and it leads to rapid, often brittle, failure.” Prior to reaching that length, “the material behavior is elastic and linear elastic theories are applicable.”

The study found the time to critical length depends on the crack location, orientation, geometries and the stresses applied to it. “SIFs had cubic relationship with the crack lengths and were dependent on the local stresses and crack orientations,” the study said.

Raza said the study supports the theory of a critical length, which should be considered by shovel maintenance programs. “The understandings, like the existence of a critical length for cracks to shovel components, exponential propagation rates and crack geometries, have important implications for shovel maintenance programs and personnel training,” he said.

Raza said the study lays the groundwork for future studies. It should be replicated in a partnership with an operating mine and OEMs and using the actual specifications of real shovels, he said. “This partnership would provide an opportunity to simulate a full-scale realistic shovel duty cycle of the complete front-end assembly that includes all other accessories, such as nuts, bolts, rivets, hinges, door and more.”

It “would allow accurate laboratory data for material properties and other fatigue parameters needed for the precision and accuracy of shovel stress modeling and fatigue studies,” Raza said. “Finally, there needs to be comprehensive field testing and data collection for model validations and improvements.”

Such would “help the design of future shovels and similar heavy machinery for better field performance and utilization of shovels in the mining and excavation industry.”

The study was Raza’s third with the team in eight years, and the model was a successor of prior models made by the Laboratory. The team has previously published several studies on models simulating the massive forces acting on mining shovels, their parts and components.

Common Mining Cables are High-tech to the Core