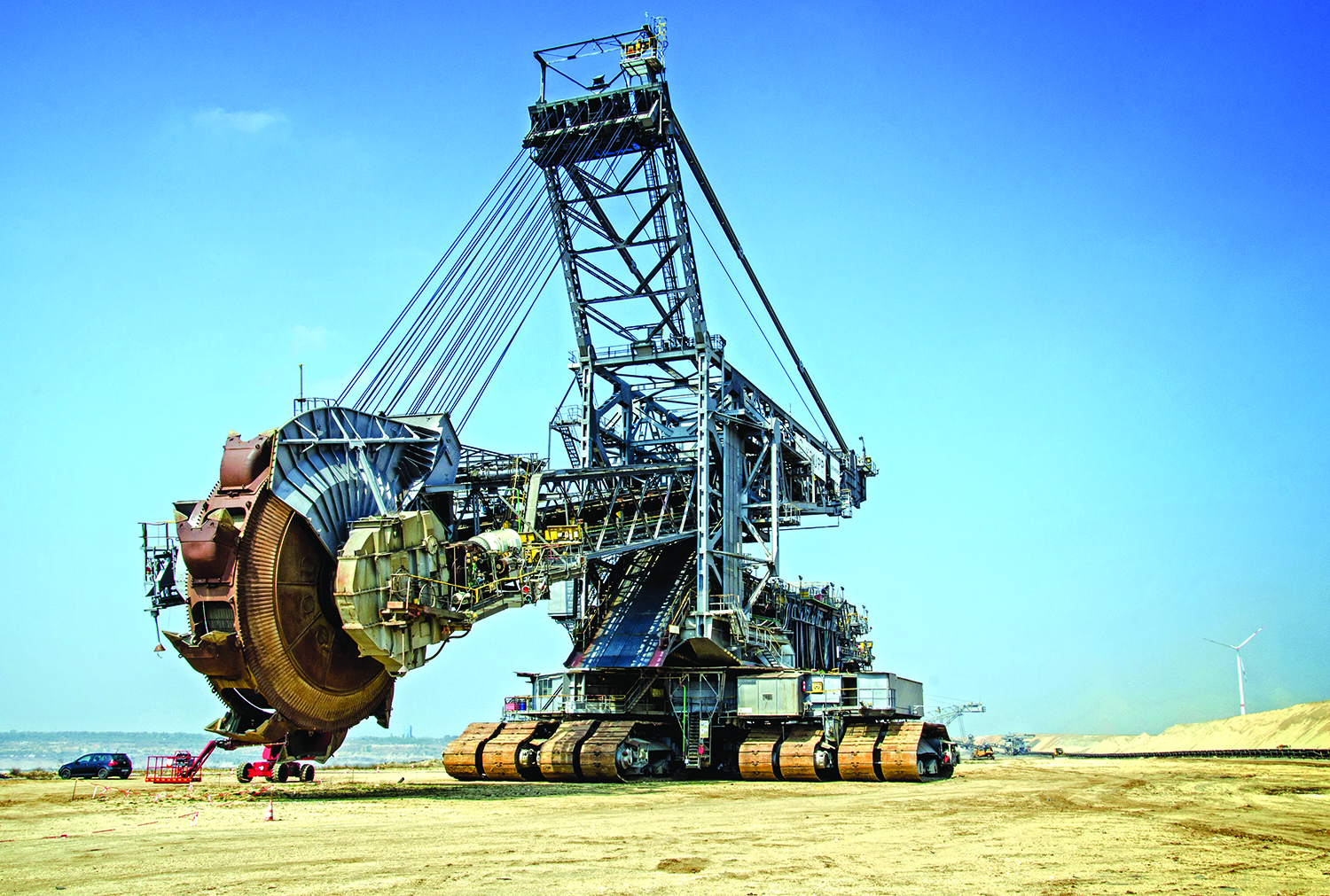 Gearboxes used in mine equipment of all types must deliver reliable production, often in extreme environmental conditions. Selecting the right gearbox oil for the application is essential for ensuring optimal performance.

Equipment maintenance is a potentially high cost factor in a mining operation, especially when it comes to unexpected machine shutdowns. Many operations are trying to avoid case-by-case solutions in favor of a more cohesive strategy for maintenance planning. Selecting high performance gear oils is an example of how an integrated approach can benefit mining operations globally, taking into account total cost of ownership (TCO) as well as the cultural shift toward collaboration and improved performance through comparative data analysis.

Lubricants on average account for less than 5% of overall maintenance costs. However, lubrication issues may contribute to as much as 75% of all equipment failures. Improving lubrication practices can cut maintenance and repair costs by up to 30%, according to a recent study commissioned by Shell Lubricants. Obviously, a failure to incorporate lubricants into TCO assessments means miners are leaving money on the table. Shell Lubricants, for example, documented customer savings of $55 million from 2011 to 2016 by working closely with mine operators to develop an integrated maintenance and lubrication strategy as part of an overall TCO approach. The Shell study underscored how collaboration with suppliers can lead to cost savings and an improved integrated strategy.

Yet, many companies fail to recognize the critical role of lubricant selection and application in reducing their TCO for various types of equipment. Mining is a major consumer of industrial gear oils globally, so there is good reason for the industry to pay attention to the positive impact high-performance gear oils can have on equipment life and their importance to minimize potential disruptions during production.

Selecting the proper oil for a specific application, however, is not always a simple process leading to one correct answer. The solution usually involves trade-offs — but buying inferior or improper gear oil may actually increase costs rather than save money. First, let’s take a look at what gear oils are meant to accomplish and what types of oils are currently available on the market, taking into account new developments and options for achieving the optimum cost-benefit solution.

Basic functions of gear oils in mining applications include reducing wear and friction, dissipating heat, inhibiting rust and corrosion, flushing contaminants, and reducing noise, vibration and shock. Gear oils must protect a gear set from pitting, spalling, scuffing, scoring and any other condition that can lead to premature failure of gear teeth or bearings. Other important properties include satisfactory viscosity at operating temperatures, oxidation resistance, high thermal stability, pressure resistance, foam suppression, compatibility with various alloys in some cases and an ability to demulsify so that it is easier to remove water from the gear box.

Gear oils can be mineral-based or synthetic, with mineral-based gear oils currently accounting for about 90% of the market. Within the mineral oil-based gear oil category, there are variations in performance and price depending on the formulation. Oils used in conditions that are considered demanding in terms of temperature, load and speed are usually formulated using additive chemistry. Mineral-based industrial gear lubricants have trade-offs related to high operating temperatures in certain applications, including heavy-duty applications within the mining industry.

Synthetic gear oils are mainly based on polyalphaolefins (PAOs), polyglycols or ester oils. Despite their superior performance, their usage has been mostly confined to specific gear systems such as wind turbines or other equipment with difficult maintenance accessibility and/or high temperatures. However, they do represent a highly attractive market with an annual growth rate of 5%, with the strongest growth projected for the European market.

Trials conducted on this test rig at a coal mine in Germany provided results indicating that NUFLUX gear oil formulations can provide protection equal to more expensive fully synthetic gear oils, at a reasonable cost.

Protection at a Reasonable Price

Evonik Industries, a specialty chemical company, does not supply gear oils or lubricants directly to end users but works with all major formulators. The company believes that awareness by mine operators and OEMs of new oil formulations is an important step in enabling customers to make more informed decisions when dealing with their lubricant suppliers. Evonik’s additives specialists have developed a high-viscosity synthetic base stock — a durable fluid foundation for specialty additives, which allows formulators to work with a number of low-viscosity base stocks. Evonik’s NUFLUX formulation has been developed in combination with highly refined Group III base oils, providing a cost-effective solution without compromising the superior performance offered by synthetic fluids.

NUFLUX formulations equal or outperform established synthetic gear oils with respect to efficiency, durability and wear protection, at lower total production costs. They are approved by leading gearbox OEMs and meet various international and national standards including DIN 51517-3, ANSI/AGMA 9005-F16, ISO 12925-1 (CKD), AIST 224 (previously US Steel 224) and IEC 61400-4. NUFLUX was tested according to the most stringent specifications in the industry. It is highly suitable for price-sensitive, high-tier applications where other synthetics are too expensive and for applications where mineral-based oils cannot achieve the desired performance.

The core of NUFLUX technology is VISCOBASE 5-220, a high-viscosity synthetic base fluid with high-shear stability and viscosity index. When combined with low-viscosity mineral or synthetic base stocks, it provides a highly durable fluid foundation for specialty additives and flexibility to work with different chemistries. VISCOBASE 5-220 offers favorable polarity that can eliminate the need for different compatibilizers even in fully synthetic formulations with PAOs. 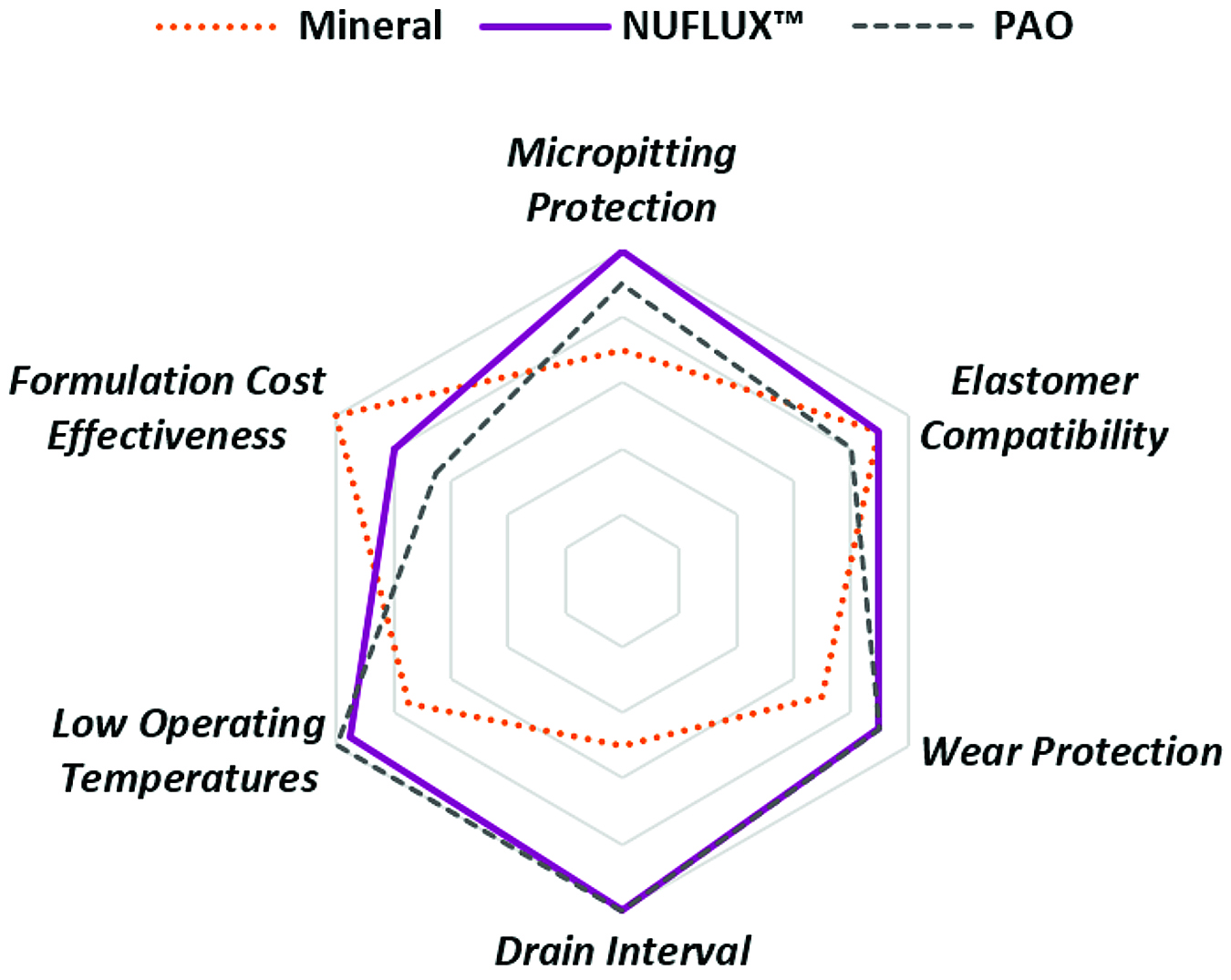 A direct comparison of performance of NUFLUX with conventional mineral gear oil and PAO-based gear oil is shown in the accompanying figure. Elastomer compatibility and micro-pitting performance are setting new benchmarks for the industry.

A controlled field trial at RAG’s coal mine in Bottrop, Germany, provided an indication of the performance advantages of NUFLUX formulations. A test rig was built with two three-stage bevel-spur commercial gearboxes typically used on conveyor systems in mining applications, a 400-kW motor and a brake. One gearbox served as a slave and was filled with mineral oil and the other gearbox was filled with the lubricants being tested, which were changed after three test runs. The load was applied in three different stages: 0% (to monitor churning losses), 30% and 50% (limitations in load stage given by motor capacity). The entire rig was enclosed during testing to minimize the effects of changes in ambient temperature while generating the data set.

The tested fluids were divided into VG 320 and VG 220 series: mineral and PAO-based (both commercial products readily available on the market), NUFLUX VG 320 and VG 220 (VISCOBASE 5-220 and Grp III oil), and a fully synthetic NUFLUX SYN formulation with VISCOBASE 5-220 and PAO base stock. Four temperature sensors were installed and monitored on the gearbox, two of them of major importance: oil sump temperature and water-cooled input shaft-bearing temperature.

With respect to oil sump temperatures, the difference between mineral and synthetic fluids was approximately 10°C, which has a major impact on oil drain intervals and is considered significant for equipment performance and protection. Furthermore, in viscosity grade 320, it was confirmed that both NUFLUX formulations performed at the same level as common PAO formulations.

Gearbox efficiency also responds to minimal changes in viscosity over the wide range of operating temperatures. NUFLUX formulations with a viscosity index above 160 ensures sufficient equipment protection, while contributing to the overall mechanical efficiency of the whole system.

Counting on the Connected Mine

Is Your Workforce Prepared for the Digital Mine?