Xstrata Copper Canada reports that consulting engineering firm Genivar won the prestigious 2011 Schreyer Award at this year’s Canadian Consulting Engineering Awards for its role in the decommissioning of the company’s former Gaspé copper mining and smelting site at Murdochville, Quebec. On awarding Genivar the recognition, the jury stated that the rehabilitation of the 50-year old Gaspé site had “set a benchmark for future mine decommissioning projects.”

Decommissioning of the former Gaspé copper mining and smelting site was the largest project of its kind in Canada. The project took four years and was completed in 2010 at a total cost of C$130 million. The mine and smelting site housed around 40 buildings, including two concentrators, the copper smelter, a sulphuric acid plant, conveyors, garages, storage facilities and administrative offices.

The project involved the rehabilitation of 650,000 m2 of land, the removal of 7 km of electrical transmission lines, and the construction of 240 m of channels for water management, as well as the rehabilitation of surface soils at 736 properties in the town of Murdochville and in the port area of Gaspé, where copper concentrate was transloaded and stored before treatment.

“Even though the numbers tell the technical story, the decommissioning was first and foremost a human experience,” Jacques Moulins, general manager, environment, site rehabilitation and resources conservation for Xstrata Copper Canada, said. “We were committed to ensuring that the communities involved in the project understood the work we were undertaking, and we maintained regular contact with both residents and local authorities. Throughout the decommissioning process we held open house sessions for local stakeholders, published regular community bulletins, and implemented a dedicated community telephone line. We also met with each individual property owner to plan remediation work and ensure they were satisfied with the end result.” 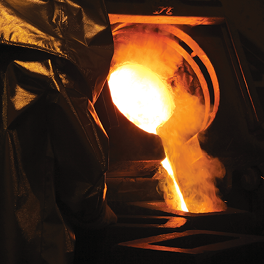