Red Eagle Mining said it is well on the way to overcoming the challenges faced during the first half of 2017. At the time, the mine was significantly behind in development due to initial difficult ground conditions pushing the primary ramp through the saprolite during 2016.

This development has given Red Eagle access to up to 44 active ore production faces at any time, depending on backfill and breasting cycles, allowing much more operational flexibility. Six new attack ramps are expected to be completed during the second quarter, which will significantly increase the number of production faces available enabling another large jump in production, the company said.

“Stope mining operations continued to ramp up and have increased each month since October 2017, with an average of 680 metric tons per day (mt/d) mined in April 2018,” Slater said. “These additional production faces will allow mining rates to continue to increase to an estimated 1,000 mt/d in July, which is the designed production for the San Ramon mine.”

The life of mine, mill processed grade was estimated in the feasibility study at 4.5 grams per mt (g/mt) of gold. During March, the ore processed had an average grade of 3.9 g/mt gold. With more mining experience at San Ramon and operational improvements being implemented, Slater expects the grade to improve to 4.5 g/mt.

“A majority of our production is currently from the wider veins near the footwall of the shear zone,” Slater said. “Occasionally, the higher-grade veins near the hanging wall are too thin to economically mine. Two smaller loaders will be put into operation during Q3, which will permit mining of these high-grade stopes with much less dilution increasing both tonnage and grade with no additional development.

“During 2017 we studied and tested backfill alternatives,” Slater said. “As a result of the updated ground support, drilling and blasting procedures implemented during the second half of 2017, quicker backfill cycle times and mining narrower stopes, full paste fill is not required. Rather than 100% paste fill, a layer of cemented paste fill is being injected on top of the backfill, where appropriate, to tighten fill and minimize ore loss.”

Instead of a fixed-distribution system, the paste is piped to an underground bay where it is delivered to the stopes by truck. The company believes that this alternative will result in lower capital and operating costs and more operational flexibility with a similar production profile.

As tonnage and grade continue to improve, Red Eagle has forecast gold production to grow steadily to 4,000 to 5,000 ounces per month over the remainder of 2018. 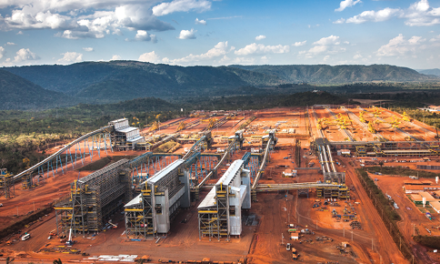