Hochschild Mining announced on September 20, that the Peruvian government has approved the mill construction permit for its 60%-owned Inmaculada gold-silver project in southwest Peru. International Minerals Corp. holds the remaining 40% of the project.

Receipt of the Inmaculada mill permit concluded the project’s construction permitting process. Current scheduling calls for completion of construction and start of commissioning during the fourth quarter of 2014.

The Inmaculada project’s total initial capital expenditure is budgeted at $370 million for a 3,500-mt/d underground operation, with average annual production of 12 million silver equivalent oz from the Angela vein. The project, which is located close to Hochschild’s other operations in southwest Peru, is set to be the company’s lowest-cost operation and will require no additional central administration cost.

Hochschild expects the mineable resource base to be expanded significantly by upgrading inferred mineral resources in the southwest and northeast extensions of the Angela vein to the reserve category through additional definition drilling work. In addition, the Inmaculada district hosts more than 25 km of low-sulphidation type, gold/silver-bearing quartz veins that remain largely untested.

Equinox Planning Underground Mine at Aurizona 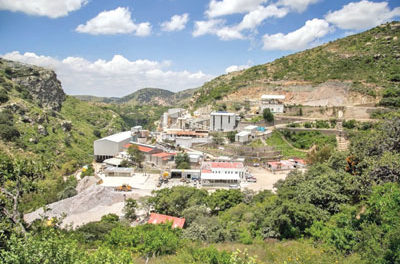