ABB noted that in order to accomplish the SAG mill rewind, a joint effort was required; prior to the task, engineers from ABB in cooperation with its suppliers and Minera Escondida initially began a design process that, within six months, produced a complex, detailed engineering design. The new stator winding material was manufactured at Alstom factories and the equipment from Switzerland and Spain was shipped to Antofagasta, Chile, on a Boeing 747 cargo aircraft specially chartered for the job.

For training purposes, a stator dummy was manufactured in Santiago, Chile, and expert site staff from

13 countries were trained, using the dummy stator, to become familiar with any possible condition that might arise. On July 1, 300 workers started work on the rewind, spread over three shifts, and the job was accomplished on schedule.

The Escondida mine produced 1.05 million mt of fine copper in 2008, roughly 8% of the world’s total copper production and approximately 23.5% of Chilean production.

ABB also reported that it won a three-year service contract worth approximately $19 million, by Vale Inco Nouvelle Caledonie. Under the contract, executed in the second quarter of 2009, ABB will provide onsite process control systems service and maintenance at Vale Inco’s process plant located on the South Pacific island of New Caledonia, 1200 km east of Australia.

Vale Inco Nouvelle Caledonie extracts and processes nickel and cobalt ore from a massive deposit on the island’s Goro plateau. The operation is expected to produce 60,000 million tons of nickel oxide and 4,300 to 5,000 million tons of cobalt carbonate annually.

The service contract forms part of an overall package offered to Vale Inco, and includes ongoing optimization and maintenance of ABB’s installed System 800xA process automation system. ABB has secured a number of significant equipment orders for the project since 2005, including the design, engineering and supply of low voltage switchgear, low voltage variable speed drives, turbine protection and control panels, portable switchrooms and the remote fit-out and cabling of the switch-rooms, including transformers and medium voltage drives.

ABB said the combined value of orders it has received from Vale Inco Nouvelle Caledonie is just under $90 million to date.

CyPlus, a Germany-based subsidiary of the Evonik group of businesses, said it has commissioned two Cold Caro’s Acid systems for New Hampshire, USA-based Jaguar Mining Inc. at their Turmalina and Paciencia gold-mining operations in Brazil. The systems treat cyanide-containing effluent.

Cold Caro’s Acid is a powerful oxidant that is produced in situ by adding hydrogen peroxide to concentrated sulphuric acid. It is used in gold extraction to convert cyanide into cyanate. “The CyPlus system is a proven process that achieves a yield of more than 80 percent of Cold Caro’s Acid,” said Stephen Gos, manager of Technology Solutions at CyPlus GmbH in Hanau-Wolfgang. The advantage of the CyPlus system, according to the company, is that the heat from the reaction can be controlled and kept at low levels, thus ensuring safe operation.

CyPlus said a feasibility study conducted by CyPlus in its laboratories in Germany showed that the Cold Caro’s Acid process outperforms other effluent-treatment systems. Basing its decision on the feasibility study and the basic engineering package, Jaguar choose to install the CyPlus system. Besides keeping cyanide levels in check, the system is claimed to be highly efficient in hydrogen peroxide and sulphuric acid consumption.

“We require low cyanide discharge levels for our operations and it is essential to perform this economically. With the CyPlus Cold Caro’s Acid systems, we expect to reduce reagent consumption by more than 30%, achieving the same low cyanide levels of 10 ppm or better. The results from the commissioning phase indicate that we made the right choice,” said Mauro Salim, project manager for both of the Jaguar Mining operations.

Chile’s state-owned copper producer Codelco has placed an order for seven Liebherr T 282 B diesel electric, AC drive mining trucks for its Radomiro Tomic open pit mine. The 400-ton (363-metric ton) payload ultra class trucks will be equipped with MTU/DDC 20V4000 diesel engines rated at 3,650 hp (2722 kW) and Michelin 56/80R63 low profile tires. The trucks are scheduled to be commissioned by the end of 2009. Codelco will then have in total 48 Liebherr mining trucks in operation at its Codelco Norte Division: 30 trucks at Chuquicamata and 18 trucks at Radomiro Tomic.

The agreement, according to Terex, includes drills, hydraulic excavators and trucks in the list of equipment covered, and provides all Rio Tinto sites with another choice of HME supply.

“The HME agreement is a culmination of time and effort of all parties concerned,” said Eric Nielsen, president of Terex. “We’re excited to continue our successful partnership with Rio Tinto and see our equipment at work at the company’s sites around the world.”

Terex has been a part of Rio Tinto’s operations in Australia and North America for more than 10 years. Scott Lawson, chairman of Rio Tinto’s Heavy Mobile Equipment Directorate, said, “We are pleased to have reached a long-term agreement with Terex, particularly to have Terex drill rigs under a contractual arrangement, given our large installed fleet and future demands in Australia.”

Maptek claims MineSuite will fulfil Newmont’s key requirements for increased productivity and performance by providing shift managers with real-time information on production as well as the status of equipment, delays and assignments. Another benefit of the system is decreased maintenance downtimes resulting from accurate reporting and the ability to receive real-time maintenance information in the underground environment during the current shift. Data is collected and processed from underground equipment and infrastructure, with in-shift and end-of-period information and reports fed back to supervisors for short term planning.

MineSuite will also provide Newmont with a proximity awareness tool that alerts operators to other vehicles in the vicinity. New voice communication, process control and automation systems which have recently been installed at Midas and Leeville enable the streaming of tracking data in real time. 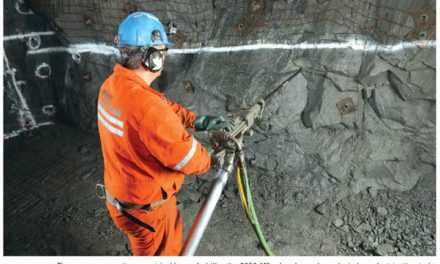