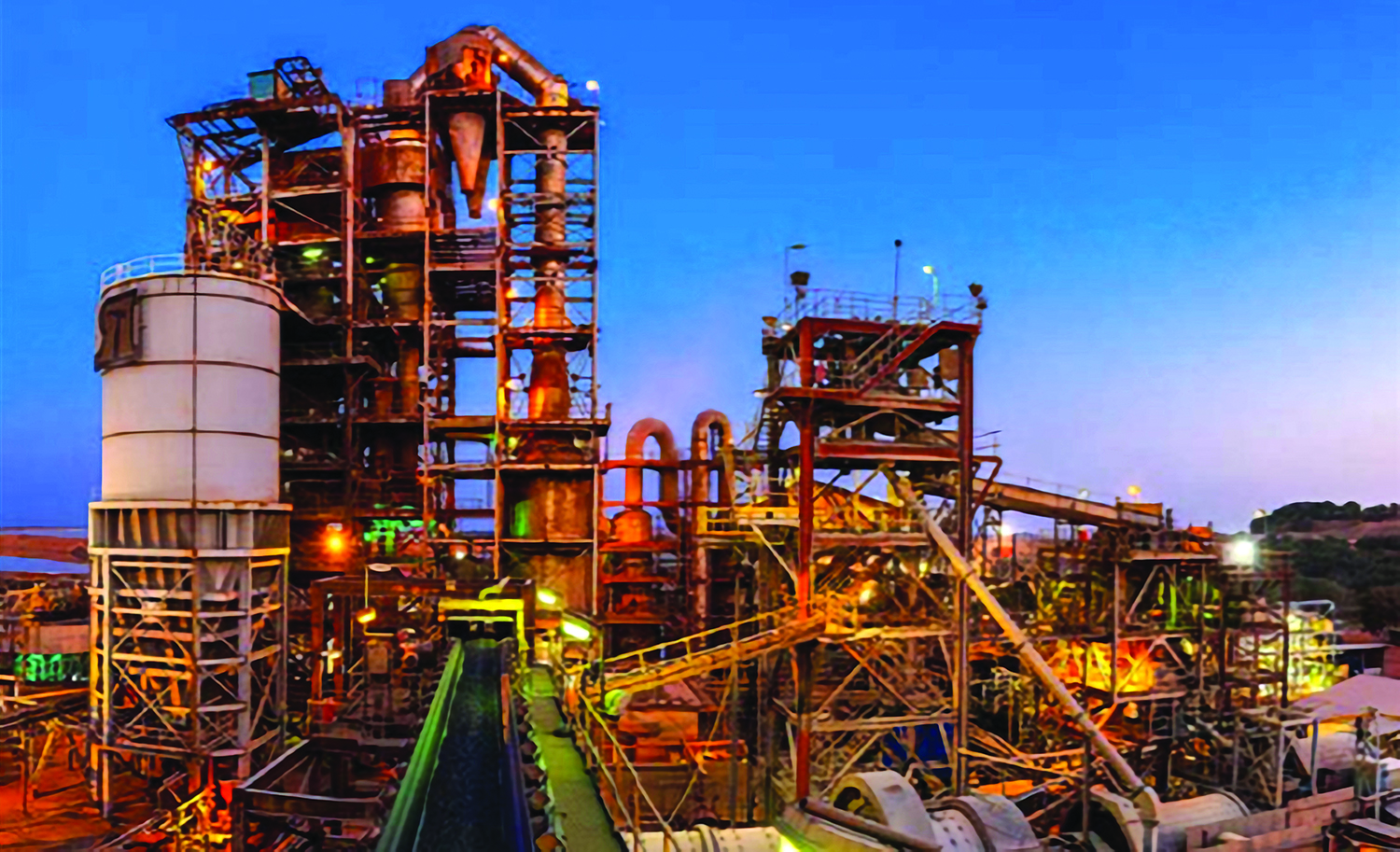 After discovering cracks in the sulphide roaster at its Syama mine, Resolute Mining spends an estimated $5 million to repair it, and takes advantage of the downtime to make additional improvements that are expected to extend the period before its next scheduled service shutdown.

Resolute Mining Ltd. announced in December that repairs to the sulphide roaster at the company’s Syama gold mine in Mali were completed within the scheduled timeline, on budget, which was initially estimated at $5 million, and without any recordable safety incidents, according to the company. The sulphide roaster was taken offline in early October after a crack was detected in the main external shell. At the time of the most recent announcement, the company said that reheating of the roaster had started prior to recommencement of normal roaster operations and concentrate feed was expected to commence in approximately 5 days.

In a November announcement, Resolute said roaster downtime was expected to provide the opportunity to accumulate more than 300,000 metric tons (mt) of available underground ore on the run-of-mine pad. This stockpile, according to the company, provided it with confidence that the mine will be able to achieve nameplate capacity of 2.4 million metric tons per year (mt/y) on a consistent and ongoing basis from January onward. 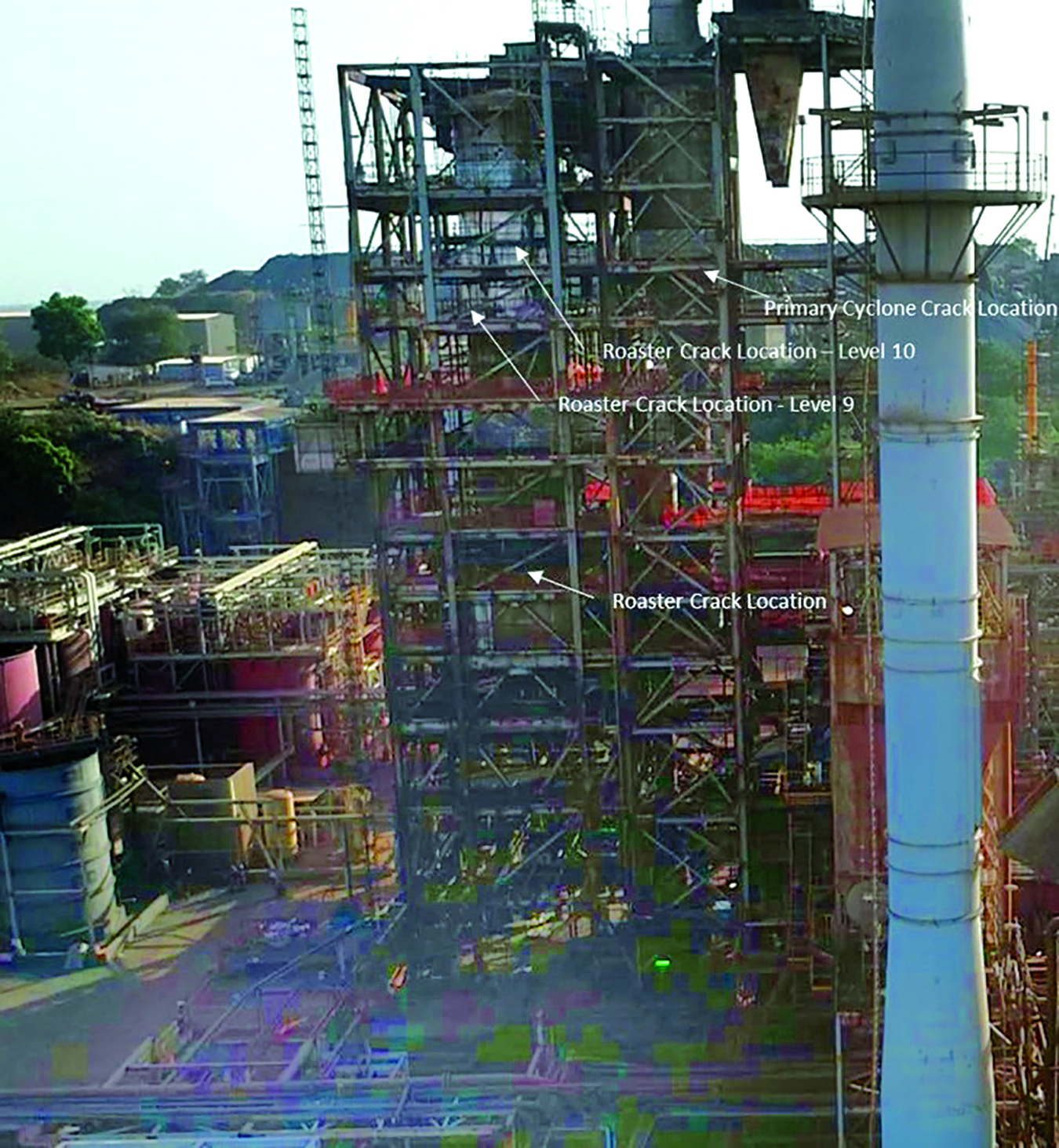 The company releases this photo showing areas of needed repairs to the roaster.

The company also announced in December that Aggreko, a leading provider of mobile modular power, temperature control and energy services, signed a 16-year contract to deliver a new hybrid power plant for the Syama complex. Aggreko will install, operate and maintain a 40-megawatt (MW) thermal power plant and a 10-MW battery storage system, with a further 20 MW of solar power planned in 2023. Work on the power plant was due to start immediately, with the first delivery of power being targeted for Q3 2020.

The new hybrid power solution, which will be administered through a Power Supply Agreement (PSA), reduces Syama’s power costs by an estimated 40%. Once all the renewable power sources are fully installed, it will also reduce carbon emissions by approximately 20%, according to the company.

Installation of the new power plant will be delivered in a two-stage approach:

Phase 1 – Installation of three Wärtsilä Modular Blocks, based on Wärtsilä 32 engines providing a total of 30 MW of power, next to the existing power station and 10-MW Aggreko Y.Cube battery storage system for spinning reserve displacement in 2020.

Phase 2 – Installation of one additional 10-MW Wärtsilä Modular Block in 2022 and 20 MW of solar power in 2023. Once the solar system is installed, the batteries will also smooth out fluctuations in the solar power output to facilitate integration into the hybrid system. 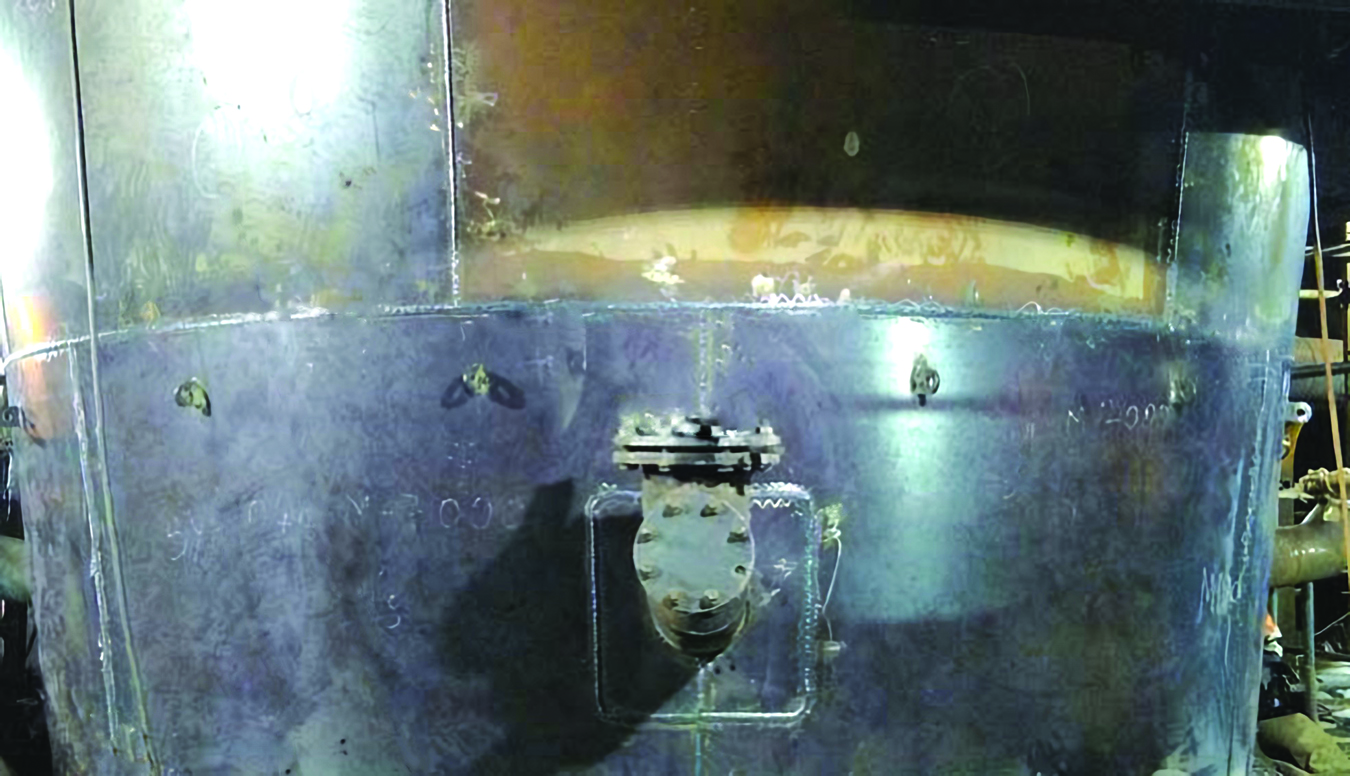 A closeup view of the steel replating installed during the repair.

The initial site infrastructure layout will include space to accommodate a fifth 10-MW Wärtsilä Modular Block, enabling the mine to add additional power capacity if needed in the future to support growth or expansion plans.

Aggreko has been providing rental power solutions at Syama since 2015, and its rental units have been the primary source of power at the mine since August.

The thermal element of the project is being implemented in partnership with Wärtsilä, using its new Modular Block technology and design. The project marks one of Wärtsilä’s first sales of its pioneering new product, and Aggreko’s first contract to deliver it.

According to Wärtsilä’s product literature, the Modular Block concept comprises a pre-fabricated, modularly configured and expandable enclosure. It incorporates proven high-efficiency medium-speed engine technology and is able to handle a mine’s unique power demands including large electric motor starts. It also provides a viable opportunity to use power from renewable sources, such as wind and solar. 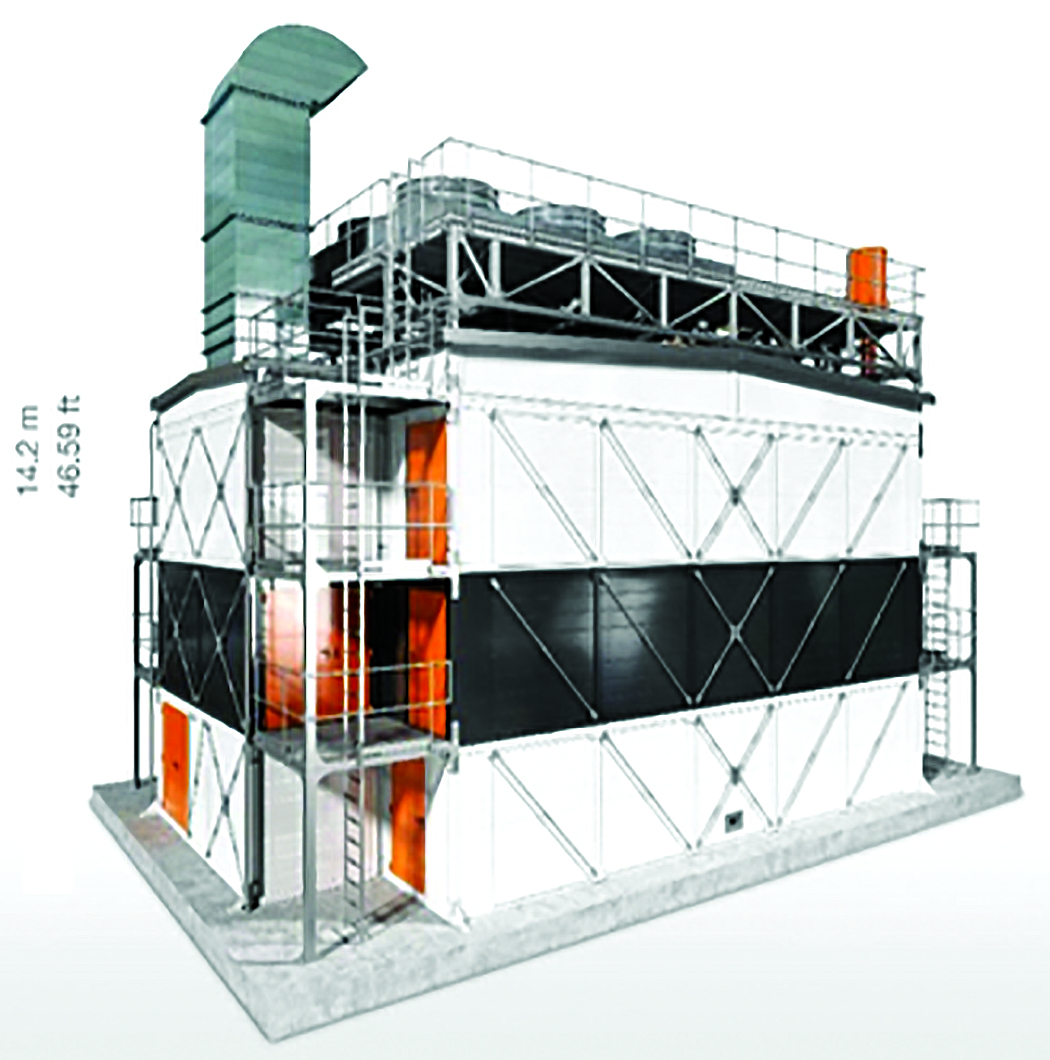 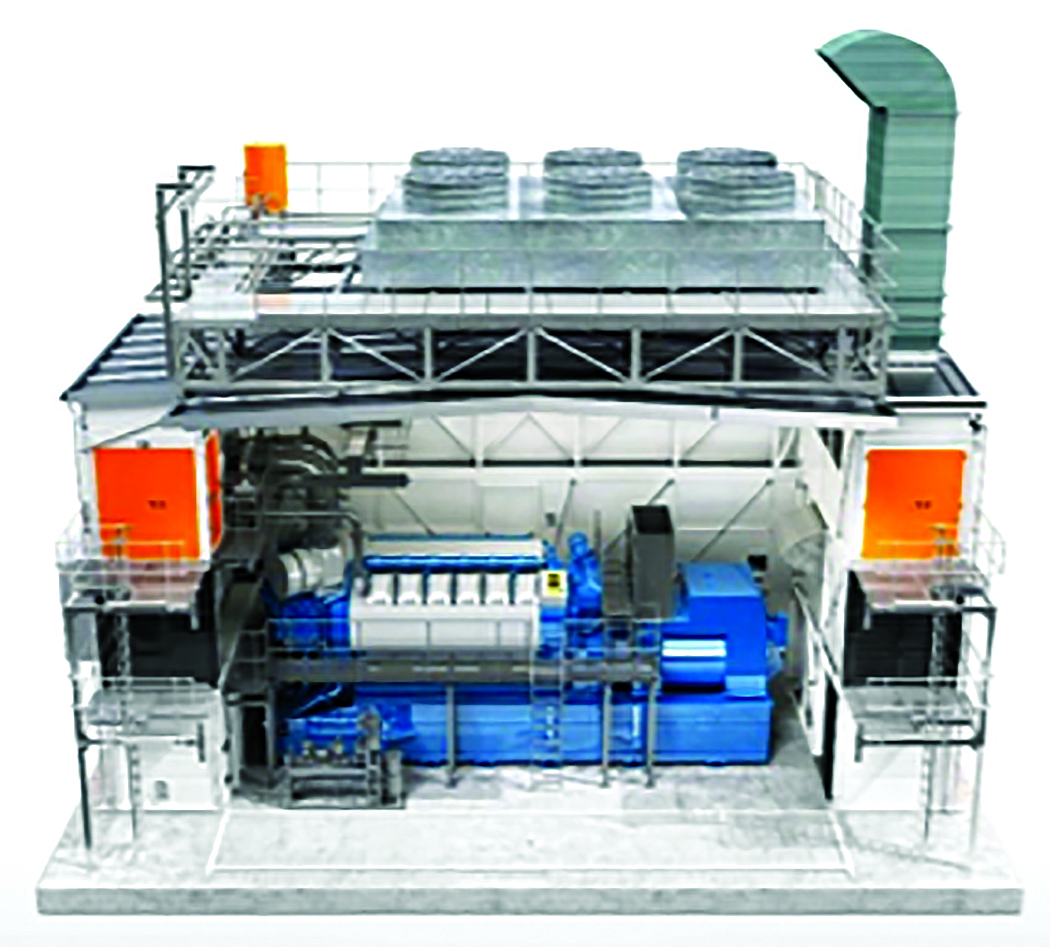 Wärtsilä said the Modular Block concept includes most of the process equipment needed for converting a simple generating set into a compact power station. Its pre-fabricated, modular design means it can be quickly and easily installed in just a few weeks. Similarly, it can be disassembled and re-installed at an alternative location should it be necessary, or expanded with additional modular blocks to adapt the power supply should the mine capacity increase. Incremental expansion allows the investment costs to be cascaded accordingly. The hybrid plant can also be operated and monitored remotely, in effect becoming an integral part of a digitalized mining operation.