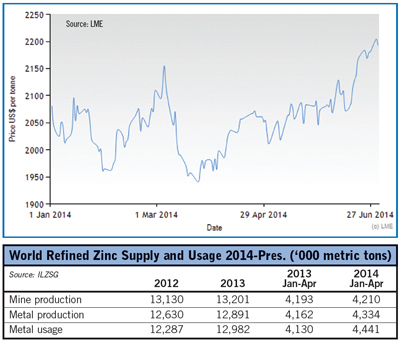 Metal prices during June remained fairly steady with the exception of gold, silver and zinc. Gold climbed back above the $1,300/oz levels, opening on July 1 with $1,326.10/oz, a 5.4% improvement. For the year, gold prices have remained positive. Similarly, silver prices climbed to $20.98/oz from 19.03/oz, a 10.2% improvement for June. Platinum and palladium prices were up 3.7% and 3.4%, respectively, while nickel and tin declined 3.4% and 3.3%, respectively. Iron ore continued its slow burn dropping $1.50 to $94 per metric ton (mt). The rest of the metals tracked on the E&MJ Price Index remained about the same except zinc.

Zinc prices increased $104.50/mt to $2,194/mt, a 5% increase. The International Lead and Zinc Study Group (ILZSG) also reported that the global market for refined zinc metal was in deficit by more than 107,000 mt over the four months from January to April 2014. Both mine production and refined metal production grew compared to the same period last year. Metal usage, however, increased more. Year-to-date, total reported inventories had declined by 123,000 mt.

Total zinc mine production was marginally higher at 0.4% (4,210 mt vs. 4,193 mt) than the same period in 2013. Decreases reported in Canada, Ireland, and Peru nearly offset increases in China, Mexico and the U.S. Higher production in Belgium, China and India led to a significant increase in total output of refined zinc metal of 4.1% (4,334 mt vs. 4,162 mt).

The ILZSG reported increases in apparent demand of 12.4% in China and 23.8% in the Republic of Korea were the main drivers behind an increase in the global usage of refined zinc metal of 7.5%. Demand in Europe declined by 0.9% and in the United States, rose by 2.8%. Chinese net imports of refined zinc metal increased by 38.8% to 261,000 mt.

Last year, Glenore closed its Perseverance and Brunswick mines that produced zinc and lead in eastern Canada. MMG Ltd.’s Century mine in Australia and Vendanta’s Lisheen mine in Ireland is expected to be closed by the end of 2015. With little new zinc capacity slated to come online, zinc prices could move higher.