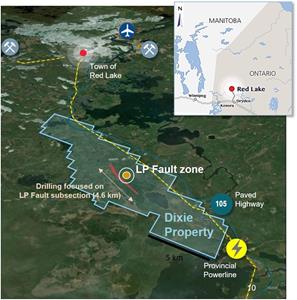 Kinross Gold Corp. entered into a definitive agreement with Great Bear Resources Ltd. to acquire all of the issued and outstanding shares of Great Bear through a plan of arrangement. Kinross will acquire Great Bear’s flagship Dixie project located in the renowned and prolific Red Lake mining district in Ontario, Canada. Extensive drilling results at the Dixie project have shown the characteristics of a top-tier deposit, according to the company.

Kinross has agreed to an upfront payment of approximately US$1.4 billion, representing C$29 per Great Bear common share on a fully diluted basis. The upfront payment will be payable at the election of Great Bear shareholders in cash and Kinross common shares, subject to a pro-ration, up to aggregate maximums of 75% cash and 40% Kinross shares on a fully diluted basis.

The agreement also includes a payment of contingent consideration in the form of contingent value rights that may be exchanged for 0.1330 of a Kinross share per Great Bear common share, providing further potential consideration of approximately US$46 million based on the closing price for a Kinross share on the Toronto Stock Exchange on December 7. The contingent consideration will be payable in connection with Kinross’ public announcement of commercial production at the Dixie project, provided that at least 8.5 million gold ounces of measured and indicated mineral resources are disclosed.

Kinross said it envisions a mine complex with an initial quality, high-grade open-pit mine, with potential upside for a longer-term, sizeable underground operation. Dixie has significant exploration upside potential with primary zones of mineralization remaining open along strike and at depth.

Kinross has been actively involved in the diligence of the Dixie property since 2018 and the asset will become a centerpiece in the company’s development portfolio.

“The Dixie project represents an exciting opportunity to develop a potentially top-tier deposit into a large, long-life mine complex,” Kinross President and CEO J. Paul Rollinson said. “In addition to the prospect of developing a quality, high-grade open-pit mine, we also believe that a significant portion of the asset’s value is its longer-term potential, which includes the view of a sizeable underground operation.”

He added that the Dixie project has multiple high-potential mineralized zones that remain open along strike and at depth, and the company is confident the asset has strong untapped upside with numerous avenues for growth.

“We are pleased to achieve our goal of adding a high-quality asset in our home jurisdiction that further bolsters our global portfolio and can potentially provide long-term tax benefits,” Rollinson said. “The Dixie project is ideally located in the renowned Red Lake mining district in Northern Ontario near established infrastructure and in a province with a low-carbon energy grid.”

Dixie’s closest geological analog, the Hemlo gold mine, was operated by three separate companies prior to its consolidation, and has produced more than 20 million ounces of gold in more than 30 continuous years of operation, according to Great Bear President and CEO Chris Taylor.

“Great Bear shareholders will now be in a unique position to benefit from the potential of the top tier Dixie project under one company and will maintain strong exposure to the project through their Kinross shares,” Taylor said. “Dixie will be a significant asset for Kinross and the company’s strong track record, coupled with its projected production growth profile over the coming years, offers our shareholders an attractive investment in its own right.”