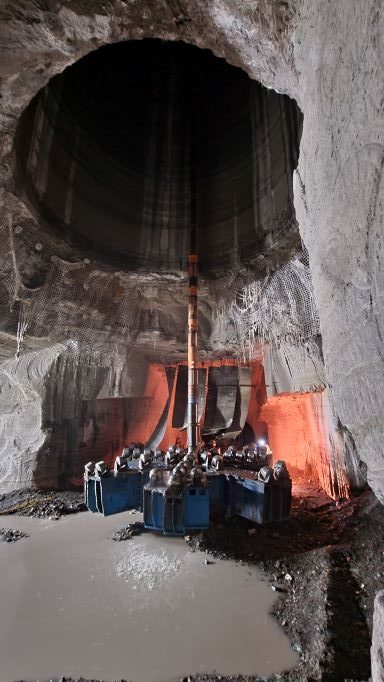 The Solvay reaming head at the Sandvik workshop in Sudbury, Ontario.

Cementation Americas recently completed a full-faced, raise-bored raise at Solvay Chemicals No. 5 Shaft in Green River, Wyoming. The project required a 22-ft-dia. shaft, complete with concrete liner, from the surface to a depth of 1,506 ft. The concrete liner thickness increased as the depth of the shaft increased, so the initial concept was to complete a pilot slash raise with a raise bore drill and then slash from the top down to achieve the differing diameters to accommodate concrete liner thickness.

Cementation instead proposed a full face raise bored shaft solution with variable diameters for each section. They worked closely with Sandvik to design, engineer and manufacture a reaming head that could be diminished in diameter rather than manufacturing different diameters of outside wings. Final design allowed for five diameter options; maximum of 26.67 ft, down to 24.48 ft, in increments of 6.6 in. The 26.67-ft-dia reamer consisted of 12 individual sections, 46 cutters and weighed 136,000 lb.

Following completion of 68-ft deep collar excavation and lining, Cementation’s Strata 950 Raise Drill was set up over the collar and a 16-in. diameter pilot hole was drilled with Micon’s rotary vertical drilling system. When the completed pilot hole was surveyed, the total deviation from vertical was found to be less than 4 in. over the entire length of the pilot hole.

Reaming of the shaft was completed on April 24 and the Cementation shaft crews are now in the process of completing the shaft lining. This raise was one of the largest ever pulled in the Americas and was completed without incident. Its success was the result of a collaborative effort by all parties involved by providing the best technical solution for the Solvay Chemicals No. 5 Shaft.

Nevsun Agrees to $1.41B Takeover Bid by Zijin Mining