Newmont Mining poured the first gold at its new Long Canyon mine in northeast Nevada on November 8 and declared commercial production at the project a week later. Long Canyon is an open-pit oxide mine in an emerging gold district less than 100 miles from Newmont’s existing Nevada operations. Declaration of commercial production was based on ongoing plant availability of more than 85% and achieving a minimum of 70% of modeled leach recovery.

Long Canyon was completed two months ahead of schedule for an investment of just under $225 million, about $50 million below budget. The first phase of development is expected to produce between 100,000 ounces per year (oz/y) and 150,000 oz/y of gold over an eight-year mine life at estimated costs applicable to sales of between $400/oz and $500/oz and all-in sustaining costs of between $500/oz and $600/oz.

Long Canyon leverages Newmont’s existing infrastructure, expertise and strong stakeholder relationships in Nevada. The project was optimized by taking a phased development approach, relying on refurbished instead of new equipment, and building a leach facility rather than a mill. At current gold prices the project is expected to generate a 26% rate of return, with a payback period of just under four years.

Long Canyon operations are based on the most significant oxide gold discovery in Nevada in more than a decade, with characteristics similar to the Carlin Trend where Newmont has been operating for more than 50 years. Operations include a surface mine and heap-leach pad that currently holds 1 million metric tons (mt) of ore at an average estimated grade of 1.13 grams (g)/mt of gold.

Newmont has grown the resource base at Long Canyon by 30% from an initial 2.6 million oz in 2013 to reserves and resources of 3.4 million oz as of the end of 2015. Up to 11 drill rigs have been operating at the project in 2016, and Newmont geologists have increased the mineralized strike length by 70% to more than 5 kilometers (km). Oxide mineralization remains open in all directions.

Long Canyon Phase 2 studies are currently in progress, and the company expects to complete the studies and secure the necessary permits to proceed with Phase 2 before Phase 1 is completed.

Centerra Gold and Premier Gold Mines have reported positive results from a feasibility study for their Hardrock gold project in Geraldton, Ontario, approximately 250 km northeast of Thunder Bay. The study supports development of an open-pit mine and processing facilities that would produce an average of 288,000 oz/y of gold over a mine life of 14.5 years. Mill throughput is planned at 27,000 mt/d.

During its first four full years of operation, Hardrock would produce an estimated 356,000 oz/y from a total of 38 million mt milled at an average head grade of 1.27 g/mt gold.

The Hardrock project’s open-pit probable mineral reserve stands at 4.7 million oz of gold contained in 141.7 million mt at an average gold grade of 1.02 g/mt, using a cut-off grade of 0.33 g/mt and including 17.3% mining dilution.

The feasibility study includes mineral reserves for the open-pit Hardrock deposit only. There may be opportunities to improve the life-of-mine average grade by processing higher-grade material from other deposits held by the Centerra/Premier partnership. These opportunities are currently being reviewed; however, there are no assurances that these additional deposits will be developed.

The Hardrock feasibility study is based on conventional open-pit mining, with 10-m benches. The open-pit
operation is planned to be owner operated, with outsourcing of certain support activities.

Existing grid power is insufficient for powering the Hardrock processing facilities and associated infrastructure. A 65-megawatt (MW), natural gas-fired power plant would be constructed to supply power, including a natural gas pipeline originating from the existing TransCanada PipeLines mainline pipeline.

The Hardrock feasibility study was prepared by G Mining Services in collaboration with third-party consulting firms. The Centerra/Premier partnership has not made a development decision on the project. Work going forward will include advancement of permitting and First Nation discussions. 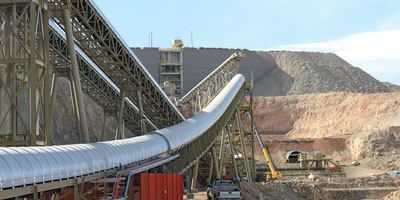 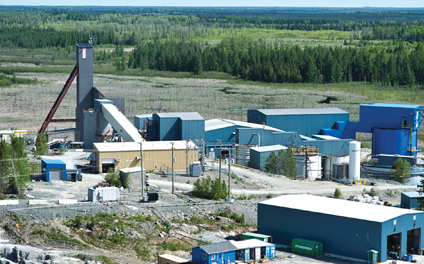