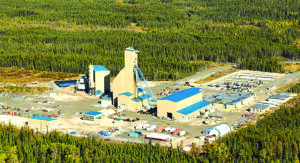 Hudbay Minerals Inc. has completed a preliminary inspection at its 777 Mine in Flin Flon, Manitoba. During mid-October, the company suspended production at the mine after a hoist rope detached from a skip, causing the skip to fall to the bottom of the shaft. There were no injuries and all underground personnel were safely evacuated from the mine using the secondary ramp access.

A preliminary video inspection of the mine shaft indicated that the damage is limited to the headframe and the bottom of the shaft in the skip compartment. It also does not appear that the cage compartments or the ore loading area were damaged, and the structural integrity of the shaft does not appear to have been compromised by the incident, according to the company.

A full inspection of the shaft and skip compartment will require an in-person inspection, which Hudbay said is expected in early November.

Underground mining activity has resumed at 777 with limited production from the mine’s ramp access. If there is no further damage beyond what has been identified, Hudbay said the 777 shaft could resume full production in December at a repair cost that is not expected to exceed $5 million.

While fourth quarter production and sales volumes will be impacted, the company said it is implementing production mitigation plans and expects the Manitoba business unit to achieve its full-year production and unit cost guidance for 2020.