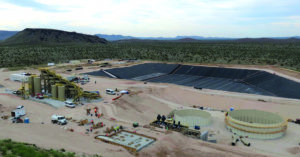 New barren and pregnant solution tanks sit in a containment area (foreground), while construction is completed on the carbon-in-leach plant (left).

Equinox Gold Corp. reported that construction of the phase 1 mine at its Castle Mountain gold mine in California is complete, irrigation of the leach pad is under way and first gold pour is expected in the fourth quarter of 2020.

Equinox Gold commenced construction of the phase 1 mine at Castle Mountain on October 30, 2019. Construction was completed with no lost-time incidents. Pre-production mining began in early June and has stacked more than 1.4 million metric tons (mt) of ore on the leach pad to date.

Commissioning of the plant is in the final stages and irrigation of the leach pad commenced on September 16. Loaded carbon from Castle Mountain will be processed in the carbon stripping and smelting plant at the Mesquite mine, 200 miles south in California, resulting in increased operating efficiencies for both mines.

“Castle Mountain will be Equinox Gold’s seventh-producing gold mine in the Americas and our second operating mine in California,” CEO Christian Milau said. “We expect Castle Mountain to be a long-life flagship asset for Equinox Gold, bringing significant benefits to our workforce, shareholders, local communities and San Bernardino County.”

The 100% owned Castle Mountain Phase 1 mine is a fully permitted, run-of-mine heap leach operation processing around 12,700 ore mt per day. Phase 1 is expected to produce on average 45,000 ounces (oz) of gold annually. The company is completing a feasibility study for the potential Phase 2 expansion, which is expected to average 200,000 oz of gold annually. The phase 2 feasibility study is targeted for completion in fourth quarter 2020.