Alderon Moves Ahead on Port for Kami Iron Project

Alderon Iron Ore Corp. has begun preliminary work on the Pointe-Noire Terminal facility at the Port of Sept-Îles, Quebec, that will handle iron-ore concentrate produced at the Kami iron-ore project in western Labrador. The Kami project is owned 75% by Alderon and 25% by Hebei Iron & Steel Group through the Kami Mine Ltd. Partnership (Kami LP).

The terminal facility will consist of a railcar unloading stub track, a single rotary car dumper, a concentrate storage yard with stacker-reclaimer, and interconnecting conveyor systems. Metso Minerals Canada will supply the car dumper, with delivery scheduled for the first quarter of 2015. Sandvik AB will supply the stacker-reclaimer, with delivery scheduled for the second quarter of 2015.

Construction of a new multi-user dock by the Port of Sept-Îles is scheduled to wrap up during the summer of 2014. The new dock will provide ship-loading services to Kami LP for up to 8 million mt/y of iron-ore concentrate.

The Kami project is located just south of Wabush, Labrador. Production is planned at 8 million mt/y of concentrate grading 65.2% iron, with commercial production beginning during the fourth quarter of 2015. Mine life is projected at 30 years. Pre-production capital is budgeted at $1.27 billion.

Aquila Receives Amended Permits for Back 40 Mine 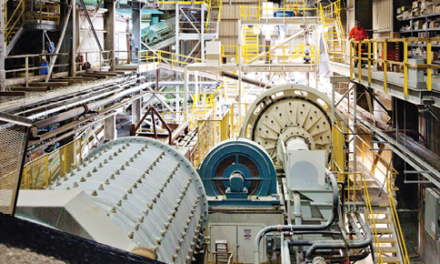