Tenova TAKRAF Africa (formerly Bateman Engineered Technologies) is putting the final pieces together in completing an order for the supply of a 5.5- x 2.75-m, hydraulically-driven SAG mill to Ontario Graphite, operators of the Kearney mine located in Kearney, Ontario, Canada, about 300 km north of Toronto. This is the largest confirmed graphite resource in North America.

The mill is a conventional SAG (semi-autogenous grinding) mill in all ways apart from its drive assembly and, it is center-driven at the discharge end using a Hagglünds hydraulic motor and power pack. “To date, this is the largest hydraulic motor installed on a SAG mill, with 950 kW of power, torque of 1,200 kN.m (start-up) and 650 kN.m (operational), and speed of 13.86 rpm,” said Van Der Walt.

“Center-driving a mill at the discharge end brings significant challenges where the discharge of ground material is concerned,” Van Der Walt said. “The parts used to connect the motor to the mill trunnion have a dual function—to drive the mill and to discharge ground material. Exposure of structural parts to abrasive material must be avoided to ensure their integrity when exposed to high torsional loads during operation and, a special discharge/drive drum and protective liner were developed to counter possible abrasion.”

“The SAG mill is the final and most valuable piece of the processing puzzle for us,” said Jerry Janik, general manager of Ontario Graphite’s Kearney mine. “Delivery of the SAG mill marks a significant milestone in our path toward graphite production, and on top of the fact, that we’re reactivating a mine with already-proven resources and infrastructure, it gives us a tremendous advantage over any of our competitors.”

Tenova TAKRAF was awarded the contract to oversee shipping of all components to site. The Kearney mine is slated to begin production in 2013.

Freeport-McMoRan to Sell its Interests in Tenke 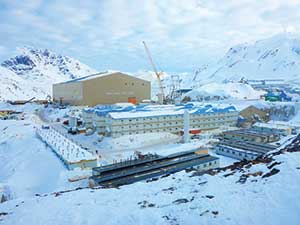