Kloppers to Retire as BHP Chief Executive Officer in May

BHP Billiton officials have announced CEO Marius Kloppers will retire in May amid weaker metal prices and a 58% decrease in half-year net profit; he will be replaced by Andrew Mackenzie, who leads BHP’s base metals business.

Kloppers has made an “outstanding contribution” to BHP’s growth, leaving the company “a safer and stronger company,” said BHP Chairman Jac Nasser. Officials at the Anglo-Australian miner have also announced that FY2012 first half profit fell to $4.2 billion, down from $9.9 billion over the same period the previous year. Over the summer, Kloppers offered to opt out of his 2012 bonus following write downs in shale gas and nickel assets totaling $3.3 billion.

“After almost 20 years with BHP Billiton–12 as a senior executive and nearly six as CEO, I believe now is the time to pass the leadership baton,” said Kloppers. He noted that, among his first decisions as CEO in 2008, was bringing Mackenzie to BHP who, having served at BP and Rio Tinto, has 30 years’ experience in oil, gas and minerals. 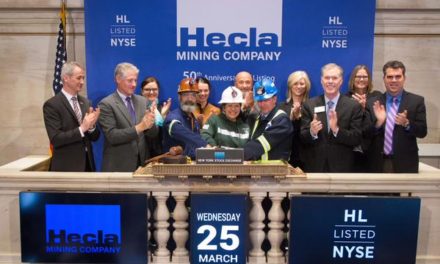 Hecla Rings the Closing Bell on the NYSE