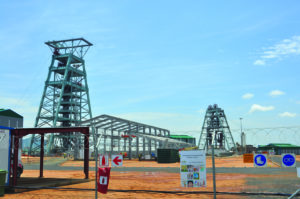 One of the most recent PGM development projects, Wesizwe’s Bakubung mine (above), has yet to be completed.

Platinum was once seen as the great hope for South Africa’s mining industry, especially as the sun set on gold. A lack of investment and aging deposits, however, point in the opposite direction.
South Africa provides around 70% to 80% of the world’s platinum group metals (PGM) requirements. Of the PGMs, platinum, rhodium and palladium are the most sought after. They straddle
the line between precious metal as well as industrial.

They are used in jewelry and as investment instruments such as exchange traded funds — much like gold bullion. Yet, PGMs are also the critical ingredient for industrial uses such as the automotive catalytic converters that scrub vehicle emissions of harmful toxins.

The future of PGMs then should be assured: except it isn’t. Bloomberg reported in August that investment in the crucial western limb of the Bushveld region of South Africa has come to a halt.

It is here, in the dusty north of the country that most of the platinum is mined, as it has been since the 1950s. Today, virtually no new mines or shafts are planned, even as aging operations work through declining grades.

“The western limb region has been the bedrock of South African platinum and that is in decline,” Mandi Dungwa, an analyst at Kagiso Asset Management, told Bloomberg. “It is the end of an investment cycle in those type of mines.”

The source of PGMs is a region known as the Bushveld Igneous Complex (BIC), a saucer-shaped geological feature that stretches across 370 kilometers (km). Its center is buried deep underground, but its rim exposed.

The BIC has a series of distinct layers, three of which contain economic concentrations of PGMs. The principal ore bodies are the Merensky Reef and the Upper Group 2 (UG2) Reef, which occur around the Eastern and Western sides (limbs) of the BIC.

A third PGM-rich layer, the Platreef, is on the Potgietersrus limb at the north-eastern edge. The granddaddy of them all was Merensky, initially mined in the early 20th century. However, UG2 increased in importance when work began in the 1970s, and now accounts for 60% of platinum production, according to Johnson Matthey, the precious metals consultancy.

In a series of conversations with E&MJ, senior mining engineers acknowledged that investment in greenfield ventures had dried up.

“The last major shaft sinking was seven years ago,” Murray Macnab, chief operating officer at UMS Group, an engineering contracting firm, said. Mining had to go below the critical 1,300-meter level to access new reserves, but few companies had shown inclination to lay out the capital required to do so.

“The region has the resource, but not the investment capital,” Macnab said.

According to Bloomberg, PGM output peaked in 2006, but the lack of investment in deep-level western limb shafts will result in a further sharp contraction in production over the next 10 years.
All the major producers have either canceled expansion projects or announced delays.

The second largest miner, Impala Platinum, said earlier this year it had suspended a $680 million project to build a new mine at Waterberg on the northern limb. The outlook doesn’t support such spending over the next decade, according to Johan Theron, a spokesman for the company.

“The sun is definitely starting to set over some of the conventional, deep, high-grade, western limb areas,” Theron said. “It’s exactly like gold: there is more gold, but it’s deeper and requires more capex and prospects of making a return are slim.”

The largest producer Anglo American Platinum has also delayed a decision on whether to spend as much as $1.5 billion on expanding output at its key Mogalakwena mine.
Sibanye-Stillwater, the gold miner transitioning into a PGM producer, is likely to cut back annual production of 16 million tons of ore to just 6 million tons, according to company insiders.
Vancouver-based Ivanhoe Mines has said it’s still evaluating finance for its new Platreef project, which could require about $1.5 billion of investment.

The large Chinese project, the Bakubung mine, appears to be at a standstill. The owners Wesizwe began work a decade ago, including an ambitious shaft sinking of up to 1 kilometer. However, the mine has yet to be completed and it is unclear how much work is being done. 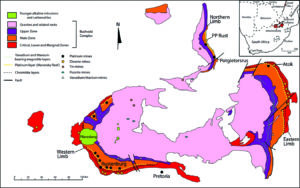 The Bushveld Igneous Complex is a 370-km wide lopolith with three PGM rich ore bodies, the Merensky and UG2 Reefs, which occur in the eastern and western limbs, and the Platreef in the northern limb.

This comes at a time when PGMs are having a generally good run, in spite of the coronavirus pandemic. Automakers around the world have had to buy increasing volumes of these metals, especially palladium for catalytic converters that remove toxic waste from exhaust emissions.

China, in particular, has tightened its rules around vehicle emissions, and by the end of this year will require most categories of transport from passenger cars to trucks and buses to be fitted with catalytic devices.

Pre-pandemic palladium approached $2,880 an ounce, making it more valuable than gold. As the world economy reopens and automakers resume production, demand for PGMs will continue to climb. A similar pattern is playing out with Rhodium, another PGM in high demand with the catalytic market.

Earlier this year, Sibanye-Stillwater Neal Froneman CEO said although automakers were looking at alternatives to these two metals, it was unlikely they would switch to something cheaper anytime soon.

“That’s what is driving increased palladium and rhodium prices and there are no reasons why it will be different looking forward for the next few years,” he said.

Froneman noted that buyers seemed to have little concept of how enduring a supply shortage would be. It wasn’t possible for mines to simply ramp up supply as demand increases. With no new projects in UG2, the source of most of the world’s rhodium, the gap between demand and supply would increase.

In the meantime, the coronavirus pandemic that briefly hurt demand, may only make the production shortage more acute, at least in the short term. Platinum mines dropped more than half their production as South Africa went into a mandated lockdown for three weeks.

“Remember how PGM prices fell so hard because world economies shut down?” said Peter Major, director of mining at Mergence Corporate Solutions in Cape Town. “Everyone thought, jeez, we’re going to have too much platinum. But then the market came to realize that the fall in production more than exceeded the fall in demand.” The over-estimation of the fall in demand had bolstered the price of PGMs, even during the worst of the market crash during late March. “This really helps the miner — you’re producing 50% less but making 50% more on the price than you were a year ago,” Major added.

BHP Spinoff Will Be Known as South32