Ivanplats changed its name to Ivanhoe Mines Ltd. effective August 28. Subsequently, on September 9, the company announced that it is proceeding with the sinking of a bulk-sample shaft to access its underground Flatreef platinum, palladium, nickel, copper, gold and rhodium discovery at its Platreef project on the northern limb of South Africa’s Bushveld Complex.

Regarding the name change, Ivanhoe Mines Executive Chairman Robert Friedland said, “As our company continues to advance our diverse, principal projects, we believe this is the right time to make the transition to a corporate identity that more broadly reflects the fact that Ivanplats has grown and evolved in recent years to become much more than a singularly focused platinum-group-metals company.”

Ivanhoe is developing three principal projects: the Platreef project; the Kamoa copper project in Katanga province, Democratic Republic of the Congo (DRC); and the historic, high-grade Kipushi zinc-copper-germanium-precious metals mine, also on the Copperbelt in the DRC.

The bulk-sample shaft on the Platreef project will access the underground Flatreef platinum, palladium, nickel, copper, gold and rhodium deposit. The South African government’s Department of Mineral Resources has notified Ivanhoe of its approval of the planned bulk-sampling procedure.

South Africa-based Aveng Mining is the shaft-sinking contractor and has been working on engineering and design for the shaft since June. Contractor mobilization and site preparation for the 7.25-m dia shaft will begin in the fourth quarter of 2014. 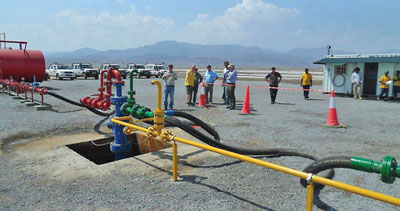