The historic rush for gold that erupted in 1849 in the state of California, later jumping to Canada’s Yukon Territory, was less about striking it rich and more about daring to take chances—trying and failing, and trying again. American entrepreneurship shifted into high gear in those days. Fast forward to the present: Discovery Channel’s television series Gold Rush has hit the mother lode for six seasons, ranking as the top-rated show on the network. 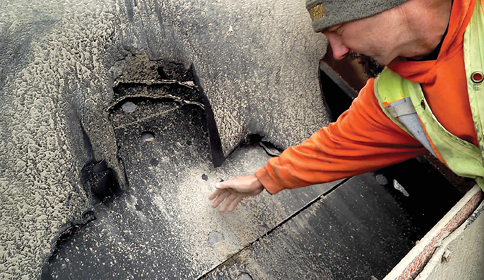 Dave Turin, a key character on the show, described the series as the saga of down-on-their-luck construction workers facing all odds in the hopes of making good in the gold business. “It speaks to ‘the American spirit,’ that of taking a chance—and getting off the couch, putting your boots on, and getting to work no matter what the risk,” he said. Turin is teamed up with cast member Todd Hoffman, the founder and leader of 316 Mining, which operates on a claim in the Klondike region of the Yukon in northwestern Canada.

“These haven’t been easy chances, as we weren’t very successful in the first several seasons— but we’ve stayed at it and we’ve evolved as does any start-up business,” said Turin. As to the current season, he said, “We’re catching a lot of gold.”

The successful evolution of the Gold Rush mining teams is due in part to the expertise and equipment provided by a number of the nation’s top mining equipment manufacturers. Among them is Polydeck Screen Corp., a manufacturer of modular rubber and polyurethane screen media. The company first got involved with Gold Rush in 2012 when they provided the screen media, a frame system, and accessories for the top deck of a 5 x 16-ft double-deck vibrating screen.

During the current Gold Rush season, Polydeck conducted a complete screen performance evaluation for the 316 Mining team. These “value-added” evaluations, according to the company, often lead to greater screening efficiency by determining needed adjustments to screen speed, stroke and acceleration. The latter is combined with an analysis of the support structure, bearings, and other key components to help prevent excessive wear and potential equipment failures.

Polydeck said it takes a unique bigger-picture approach to maximizing screen performance for its customers. At the 316 Mining site, the screen performance evaluation and subsequent fine tuning ultimately led to an estimated 25% increase in overall screening efficiency for the Hoffman/Turin crew.

“Working with Polydeck is a great partnership. They continue to take chances on us—and that’s what our show is all about,” said Turin, who added that he first requested Polydeck screen media several seasons ago. “Back then, we put their media on the top deck of the wash plant that we called ‘Big Red.’ This season, we’ve got it on the plant we call ‘Monster Red,’ and we’ve doubled the production capacities that we had two years ago.”

Turin became familiar with Polydeck media when he installed it in his family-owned quarry and paving business, which is based in Oregon. “It’s all about the longevity of the Polydeck media. Unlike traditional wire cloth, we can put Polydeck in, and forget about it. The money we save in labor and wire cloth changeouts far outweighs the initial cost of the media. That’s why we wanted it for our gold mining operation.”

In 2014, the Hoffman/Turin crew upgraded to a larger triple-deck, 6 x 20-ft screen, and once again requested Polydeck media. Turin shared their specific requirements with the Polydeck engineers, who recommend the optimum configurations of opening types and sizes for the application. “They understand our machine; what we are sluicing; and provided us the just the right openings for our type of material,” said Turin.

Polydeck provided both Polydex modular polyurethane panels and Rubberdex modular rubber panels—as well as frame systems and side wear plates. Turin said the modularity of the deck means they can change out a single panel at a time if need be; rather than replace the entire deck. The biggest thing, he said, is being able to change out panels as necessary on just the feed end where you get all the impact and wear.

Hoffman said, “We’ve got the best wash plant in the Klondike, hands down.” His crew reported that over two seasons, they have put more than 800,000 yd3 of abrasive, quartz-filled material over the rubber and polyurethane decks, at an average of 250 yd3/h—running 24/7 from June through September each season. “The decks still look great and we’ve maximized our uptime and saved big bucks on maintenance and labor. For example, if we had used standard AR Steel plate on our feed end (vs. the Armadex), we would have been changing that out once a week,” said Turin. 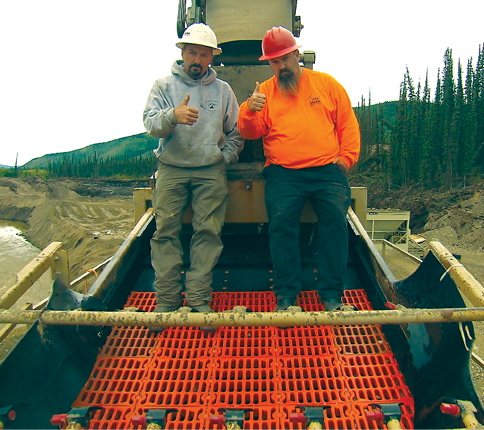 Turin and Todd Hoffman (right), another cast member, say they are convinced the initial cost of installing polyurethane and rubber media panels and parts is significantly offset by reduced labor requirements and longer service life provided by the Polydeck products.

Mike Garrison, a Polydeck product support specialist, has conducted hundreds of screen performance evaluations in the mining industry. He traveled twice to the Yukon to visit the 316 Mining site to complete an evaluation and offer solutions for greater efficiency. “We offer the technical assistance that goes beyond looking at screen media and examines the entire screening circuit—to make the circuit more reliable, to increase their recovery; and to minimize maintenance,” said Garrison.

Evaluations record a screen’s orbits; motor speed; any harmful deflections along the Z axis; material travel rates; and any movement of the support structure. It also examines a screen’s critical frequencies to help determine the screen’s optimal speed and stroke. Importantly, the final report includes any recommended adjustments to a screen’s operating parameters and/or media to maximize its operating potential in its particular application.

Within Garrison’s detailed report, an example of one of the major issues uncovered during the evaluation is that the combination of the screen’s displacement and acceleration was excessive for the bottom-deck apertures (openings) and was likely contributing to inefficient screening on the bottom deck. The level of acceleration was also causing body (Z) axis deflections along the bottom deck. Consequently, adjustments were made resulting in an 11% reduction in the displacement (stroke) of the vibrating screen. “This adjust ment boosted overall recovery and had an immediate effect upon overall efficiency,” said Garrison.

After fine-tuning the screen’s operating parameters, Turin reported that they saw a noticeable improvement in the bed depth and carryover on the bottom deck. “We have increased production to 280 yards per hour with very little carry over. Depending upon the quality of pay dirt that we run, our recovery rate is between 3/4- and 1-1/2-ounces for every hundred yards of material over the screen, which is a significant increase over last season,” said Turin. While initially skeptical of all the troubleshooting, Turin said the results achieved after completing the recommended adjustments has him convinced of the value of conducting periodic screen performance evaluations.

Optimum screening performance is less about trial and error, and more about understanding the science of screening. The Hoffman/Turin crew acknowledged that its partnership with Polydeck has allowed them to “dial in” their requirements; and continually identify areas that will deliver the greatest return. Ultimately, it’s all about less risk and greater recovery.

This article was written on behalf of Polydeck Screen Corp. by Carol Wasson, an Indiana, USA-based freelance writer specializing in the aggregate and construction equipment sectors.

Cost Control for an Uncertain Economy