An improved version of the Speedi-Sleeve line for radial shaft sealing, claimed to offer exceptional performance, is now available from SKF, which says its new-generation Speedi-Sleeve and radial shaft seals offer an enhanced sealing system performance with better reliability and extended maintenance intervals, while enabling users to restore malfunctioning sealing systems without having to disassemble machines or regrind shafts. The new-generation Speedi-Sleeve, according to SKF, should find wide  use in industrial gearboxes, electrical equipment such as motor shafts, mining and mineral processing equipment including crushers, conveyors, fans and pumps, and other applications. Produced using a proprietary stainless steel that offers increased strength and superior ductility, Speedi-Sleeve provides an optimized sealing surface and minimized wear on the sleeve and sealing lip during operation. In tests conducted by SKF, the new generation Speedi-Sleeve demonstrated 50% greater resistance to abrasive media than the previous sleeve version. Standard sizes cover shaft diameters ranging from 11.99 to 203.33 mm (0.47 to 8 in.). The sleeve is also available as Speedi-Sleeve Gold made for highly abrasive environments and for applications with seals made of filled PTFE.
www.skf.com 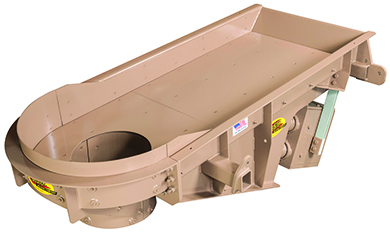 Low-capacity Reclaim Feeders for Any Mine