Global lead mine production rose by 9.1%. This was primarily a consequence of increases in Australia, Bolivia, China, India, Mexico, Peru and the United States. A 10.8% increase in global lead metal production was mainly the result of higher output in Belgium, China, India and the Republic of Korea. Production also rose in Australia, France, Germany, Mexico, Poland and the United States.

Refined lead metal usage increased in a number of countries including Brazil, China, India, Japan, the Republic of Korea, Turkey and the United States, resulting in an overall rise globally of 11.2%. In Europe, usage grew by a more modest 1.1%, mainly a consequence of rises in the Czech Republic, France, Italy, Poland and Spain that were partially balanced by reductions in Germany, the Russian Federation and the United Kingdom.

The global market for refined zinc metal was in surplus by 31,000 mt over the first four months of 2021 with total reported inventories increasing by 142,000 mt.

World zinc mine production rose by a substantial 11.3%, influenced by increases in Australia, Bolivia, China, India, Ireland, Mexico, Peru, South Africa and the United States. In Canada, Finland, Kazakhstan, Namibia and Poland, however, output was lower compared to the same period of 2020. Higher refined zinc metal production in China, India, Italy, Japan, Peru and the United States was the main driver behind an overall rise globally of 4.5%.

An increase of 10.1% in global usage of refined zinc metal was mainly a consequence of a substantial rise in China. Usage was also higher in a number of other countries, including Brazil, India, Japan, the Republic of Korea, Taiwan (China), Thailand and Turkey. In Europe, usage rose by 1.6% but in the United States, apparent consumption fell by 2.1%. 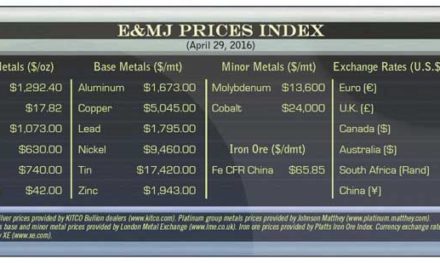