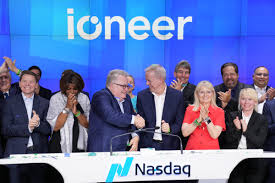 ioneer Ltd., an emerging lithium–boron supplier, rung the Closing Bell at Nasdaq MarketSite in Times Square, New York yesterday to celebrate its recent listing on the exchange. The company began trading on Nasdaq through an American Depositary Receipt (ADR) program on June 30, 2022, under the symbol IONR. To commemorate the occasion, ioneer Executive Chairman James Calaway and CEO Bernard Rowe rung the Closing Bell alongside members of the company’s board of directors and senior management team.

The bell ringing comes just days after ioneer announced it has entered into its second and third binding lithium offtake agreements, finalizing the total planned lithium carbonate output and representing a significant milestone for the company and the United States’ domestic electric vehicle supply chain. An agreement with Ford Motor Co. was announced on July 22, 2022, and an agreement with Prime Planet Energy & Solutions, Inc., a joint venture between Toyota Motor Corp. and Panasonic Corp., was announced on July 31, 2022.

“We are honored to celebrate our Nasdaq listing by ringing the Closing Bell,” ioneer Executive Chairman James Calaway said. “I would like to thank our shareholders as well as the ioneer team and board of directors for their dedication and support throughout this process.”

Jakob Stausholm Will Take Over as Rio Tino Chief Executive