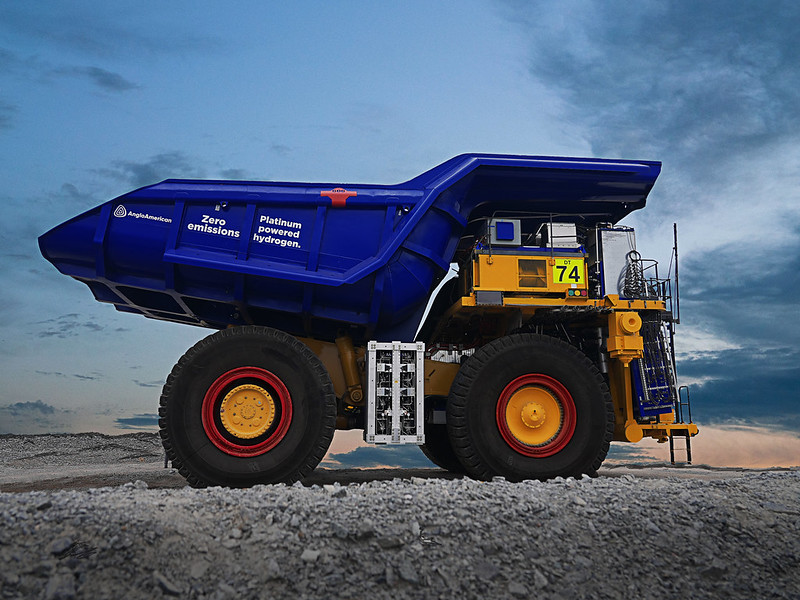 This is the first time a truck of this size and weight (510-mt laden, which includes a 220-mt gross vehicle weight and a payload capacity of 290 mt) has been converted to run on hydrogen that will be produced on-site in hybrid combination with a battery.

The nuGen truck uses a hybrid-hydrogen fuel cell providing roughly half of the power and a battery pack for the other half, to allow energy recovery from braking. Hydrogen enters the fuel cell from the tank and mixes with oxygen to create water in a chemical reaction catalyzed by platinum. This generates electricity that is used to power the motors that drive the wheels. The only emission from the vehicle is water vapor.

The 2-MW hybrid battery/hydrogen fuel cell powerplant, which replaces the diesel engine installed, has been designed by Anglo American and First Mode in Seattle, USA. The power management and battery systems in the truck have been developed to improve overall efficiency by recovering energy when the haul trucks travel downhill, through regenerative braking. By harvesting the regenerative energy created when driving downhill, it reduces the need for external energy. This energy, stored in the battery, together with the hydrogen extends the truck’s range and reduces the out of cycle time for the trucks, since hydrogen refueling is significantly faster than recharging batteries.

As part of the integrated nuGen solution, Anglo has also built a hydrogen production, storage and refueling complex at Mogalakwena that incorporates the largest electrolyzer in Africa and a solar PV field to support the operation of the haul truck. nuGen is part of FutureSmart Mining, Anglo’s innovation-led approach to sustainable mining, which brings together technology and digitalization to drive sustainability outcomes, including its commitment to carbon-neutrality across its operations by 2040.

“nuGen is a tangible demonstration of our FutureSmart Mining program changing the future of our industry,” Anglo American CEO Duncan Wanblad said. “With diesel emissions from our haul truck fleet accounting for about 10%-15% of our total Scope 1 emissions, this is an important step on our pathway to carbon neutral operations by 2040. The mining industry is playing a considerable role in helping the world decarbonize, both through our own emissions footprint and the metals and minerals that we produce that are critical to low carbon energy and transport systems.”

Over the next several years, Anglo plans to convert or replace its current fleet of diesel-powered trucks with this zero-emission haulage system, fueled with green hydrogen. If this pilot is successful, the company could remove up to 80% of diesel emissions at its open-pit mines.