Eldorado Gold has released the results of an expansion study that outlines a potential doubling of production at its Kişladağ heap-leach gold mine in western Turkey. Assuming positive ongoing results related to final project details, a construction decision and placement of orders for long-lead equipment are expected by year-end 2011.

Based on current proven and probable reserves of 10.2 million oz, the overall production rate for crushing, screening and stacking at Kişladağ is expected increase to 25 million mt/y, up from 12.5 million mt/y currently. Run-of-mine ore treatment will average approximately 8 million mt/y, with a peak of 13.6 million mt/y. Total annual material movement will peak at 100 million and will average about 65 million mt/y throughout the 2012 to 2026 period.

Expansion of the crushing and screening plant will include installation of a parallel process circuit to handle the additional 12.5 million mt/y of ore throughput. The circuit will include three stages of crushing and screening and will incorporate scalping of fines. A stand-alone overland conveying and stacking system will be installed to transport ore to an expanded leach pad.

Additional capacity for solution processing and gold recovery will require construction of a new adsorption-desorption-recovery plant and corresponding process ponds. Low-grade run-of-mine ore will be trucked directly from the mine to a dedicated leach pad. Metallurgical recoveries are estimated at 66% for crushed ore and 40% for run-of-mine ore.

The current truck and shovel fleet will continue to be utilized through the fleet’s expected operating life. A fleet of larger trucks and loading equipment will be introduced during the expansion phase. Eldorado has received quotations from various suppliers of selected equipment, and these quotations were used to estimate the overall capital cost of the mine fleet. This cost estimate includes support equipment and installation of a trolley-assist distribution system for truck haulage. 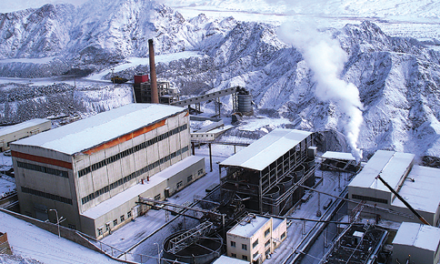