Ivanhoe Mines has reported the results of an independent preliminary economic assessment (PEA) that proposes two phases of development for its Kamoa copper project in Katanga province, Democratic Republic of the Congo (DRC). The first phase targets underground mining of 3 million mt/y of high-grade copper ore and production of about 100,000 mt/y of copper in concentrate for sale to smelters. The second phase entails a major expansion of the mine and concentrator and construction of a smelter to produce 300,000 mt/y of blister copper beginning in the project’s fifth year of operation.

The Kamoa production scenario calls for mining 326 million mt at an average grade of 3% copper and production of 7.8 million mt of blister copper, plus 500,000 mt of copper in concentrate in the initial concentrate phase, over a 30-year project life. Life-of-mine average total cash costs, after credits, are estimated at $1.18/lb of copper. 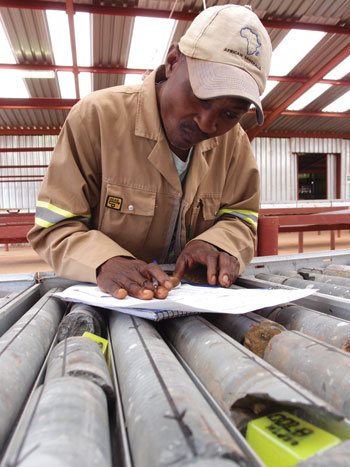 The Kamoa copper project is located approximately 25 km west of the town of Kolwezi and about 270 km west of Katanga’s provincial capital, Lubumbashi. Ivanhoe holds a 95% interest in the project, and the DRC government holds the remainder.

The sediment-hosted, stratiform Kamoa copper mineralization is similar to the Polish Kupferschiefer and Zambian ore shale deposits. The mineralization has been defined over an area of 15 by 20 km. The dip of the mineralized body ranges from 0° to 10° near-surface above the Kamoa dome to 15° to 20° on the flanks of the dome.

The orebody is amenable to large-scale, mechanized, room-and-pillar or drift-and-fill mining. A minimum mining thickness of 3.5 m was used in the PEA. A strategy of prioritizing higher-grade mining areas early in the mine life and later returning to lower-grade areas has been built into the mine plan.

Planned accesses to each mining section include a conveyor decline and two access declines. Additional infrastructure requirements, such as surface and underground offices and maintenance facilities, ventilation raises and paste backfill plants, are designed to support operations at the blister-copper production rate of 300,000 mt/y. Building of the initial underground mine-access decline is planned to begin in early 2014.

The smelting process proposed in the Kamoa PEA is based on direct-to-blister flash smelting technology. A sulphuric acid plant will produce about 1,600 mt/d of acid from smelter off-gases.

Power for the Kamoa project is planned to be sourced from the DRC grid following the rehabilitation of three existing hydro power plants. A financing agreement has been finalized between Ivanhoe Mines and DRC’s state-owned power company, La Société Nationale d’Electricité.