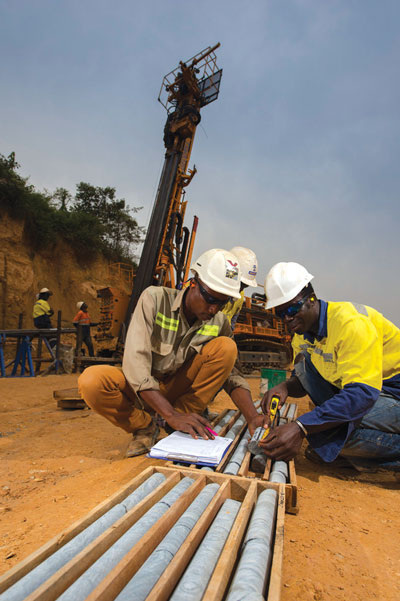 Golden Star has announced plans to develop an underground mine beneath the current open-pit at its Wassa gold-mining operations in southwest Ghana. The underground production will supplement ongoing open-pit production as feed to the 2.7-million-mt/y Wassa processing plant.

A recently completed feasibility study estimates the Wassa mine will produce an average of 163,000 oz/y of gold over a mine life to 2024. Life-of-mine cash operating costs for the combined open-pit/underground operation are estimated at $780/oz, while all-in sustaining costs are estimated at $938/oz.

The Wassa underground project got underway in December 2014, when Golden Star purchased some necessary underground mining equipment and received a permit for an exploration decline. Access to underground stoping areas will be via a twin-decline system from the northeast wall of the Wassa open pit. The main decline will be 5.8 m high x 5.2 m wide and will be developed using standard trackless mechanized mining equipment.

The upper stopes will be mined using longitudinal longhole open stoping with waste rock fill, enabling efficient early production before a cemented rock fill preparation and delivery system is installed. The Wassa open pit will eventually mine down to the top of these upper stopes, but only towards the end of the mine life.

In the deeper, wider areas of the deposit, a transverse longhole open stoping method will be used. A primary-secondary mining sequence will be implemented, with primary stopes filled with cemented rock fill, and secondary stopes filled with waste rock fill. The overall stoping sequence will be bottom-up to reduce the incidence of sill pillar development.

New surface infrastructure will be constructed to support the underground mine, including electrical power supply from the grid with backup genset support and surface mechanical and electrical workshops.

The Wassa processing plant currently includes a four-stage crushing circuit, grinding, gravity recovery, carbon-in-leach circuits, and a thickener. A final electrowinning recovery circuit is in place, along with associated secure gold room facilities. Average metallurgical recovery in fresh ore is currently 93%, and future recovery from the combined Wassa open-pit/underground operation is expected to be the same.

Xstrata Bids for Sphere and its Iron Ore Projects