Mine ramps up mineral production and expands equipment needs

There may not be gold in them thar Southwestern hills, but there is plenty of copper, molybdenum and silver. There are enough mineral reserves in northwestern Arizona for Vancouver, British Columbia-based Mercator Minerals Ltd. to invest hundreds of millions of dollars in its Golden Valley, Arizona Mineral Park mine.

In the early 1960s, the Duval Corporation began production in the predominantly copper mine nestled in between the Black and Hulalapai Mountains. It remained a 12,000 ton-per-day (t/d) mill and concentrate operation until being converted to an SX/EW (solvent extraction/electrowinning) mine in the mid-1990s, where production was eventually capped at 6,000 gallons per minute (gal/min).

It was not until Mercator purchased the mine in 2003 that its true production potential was realized. Spurred by reports of global demand for copper increasing by as much as 4.3% annually and spiking copper prices above $3/lb, Mercator embarked on an ambitious two-phase expansion of the mine in 2007. The plan: increase operations to process 50,000 t/d of the deposits containing copper, molybdenum and silver by the end of 2011.

The initial phase included a crushing circuit, mills and flotation tanks for mineral recovery at capacities reaching 25,000 t/d. Calculations showed the expansion plan remained profitable during the life of the mine at pricing levels of at least $1.53/lb for copper and $10.16/lb for moly. With projected copper prices of greater than $3/lb, everything seemed to be going as planned.

Then the global financial crisis of late 2008 briefly decimated commodity prices for the mine’s primary and secondary products. Prior to the meltdown, moly was one of the best performing metals, averaging $33/lb for the first half of 2008. In October of the same year, moly plummeted to nearly $10/lb, roughly the breakeven point for Mineral Park’s expansion.

Copper, currently the mine’s primary product, fared even worse. Post-crisis, “copper went down to as low as $0.78/lb,” said Perry TenBrink, manager of mining operations for Mineral Park. Mineral Park survived the crisis, and, as commodity prices rebounded, the mine was positioned to take full advantage of market conditions. The new production circuit of Phase I expansion was commissioned in the fourth quarter of 2009, awakening this sleeping giant of a mine.

From the size of the crusher to mill capacities to the number of Terex 100-ton rigid haul trucks, everything is being done on a much larger scale than at any other time in the mine’s existence. The number of employees has soared more than five-fold within the last few years to 330.

Blasting, conducted daily, is handled by Mineral Park employees. Patterns range in size from 14- x 14-ft to 18- x 18-ft with the number of holes varying from 100 to 300. “We blast one to three times per day and anywhere from 40,000 to 130,000 tons as required to keep up with production,” said Jorge Lozano, senior mine engineer for Mineral Park.

Blasted particle size designated for crusher feed has a maximum of 24-in., but “we plan for a 12-in. average feed size to maximize productivity,” Lozano said. Mineral Park’s ore control team follows the site’s geology and grade control for material routing and stakes are placed in the field with different colored flag markers. Red-flagged material is designated as crusher feed for the mill process.

Centrally located in the heart of the mine, the crushing and mill circuits are positioned to reduce material haul times and increase trucking efficiencies. “Current haul cycle times to the crusher average 15 minutes,” said Lozano.

Phase I expansion features a single 2,000 tph jaw crushing circuit to reduce the 12- to 24-in. porphyry and schist feed material to a minus 6-in. size for the mills. At this site, porphyry is higher in molybdenum than copper and schist is higher in copper. Phase II adds a second identical jaw crushing circuit to the site, expanding maximum primary reduction capabilities to 4,000 t/h.

Crushed material is conveyed to the mills, where it is further crushed and separated through a flotation beneficiation process. Two semi-autogenous grinding (SAG) mills provide a secondary reduction of the minus 6-in. feed. Two ball mills offer final reduction into a fine pulp, where 75% passes a 100-mesh screen. By the time Phase II is opened, the mine will operate two additional SAG and ball mills, doubling this circuit’s production capacities.

The final stage in the production process includes a series of rougher cells, where the pulp is chemically treated to separate the copper, molybdenum and silver from the gangue. “We currently have 10 tanks in operation and will have a total of 17 tanks when Phase II is complete,” said Lozano. The flotation cells recover more than 70% of the copper and molybdenum and nearly 60% of the silver at the mine. This process results in more than 10 million lb of copper, nearly 2 million lb of molybdenum and approximately 200,000 oz of silver captured each quarter.

The mine’s SX/EW process adds to the copper production totals. Hauled to a separate section of the mine and dumped in layers, a weak acid solution percolates through the heap to leach the copper from the ore. This process recovers nearly 250,000 lb of cathode-grade copper every quarter.

A new power source is on tap for Mineral Park as part of the Phase II expansion. At a cost of nearly $30 million, a gas turbine generator will produce 35 MW to run the high-production crushing and mill circuits. “We ran 22 miles of high-pressure 8-inch gas line to tap right into the line pumping gas to California,” said TenBrink. It’s anticipated the move will significantly save the mine money rather than using electric power from the grid.

The glue binding together the entire operation is the fleet of 15 Terex TR100, 100-ton rigid trucks—largest in the Terex Construction truck lineup—currently hauling the crusher run, heap leach and waste material at the mine. “The mine and crusher are designed to operate around 100-ton trucks,” said TenBrink. “This size of truck offers the advantages of lower initial investment and long term operating costs (than larger trucks), resulting in a lower cost per ton to operate.”

Low stripping ratios at the mine help improve hauling efficiencies and allow the smaller tonnage trucks to be used. “Our ratio of waste-to-ore averages 0.6:1 over the life of the mine, which is low for a milling operation,” said Lozano.

To say Mineral Park demands a lot from its trucks is an understatement. Two, 12-hour shifts at the mine keep the rigid trucks hauling material up the 10% sloped roads connecting the muckpile to the crushing circuit, heap leach layers and waste area. The trucks, according to TenBrink, are tough. “We average 7,000 hours per year on our equipment [trucks and loading units]. It’s not uncommon for us to log 350 hours on a truck and 250 hours on the shovel and loaders in just over two weeks,” he said.

Currently, each truck hauls an average of 35 loads per shift; more than 300 loads a shift for the entire fleet. The Terex TR100 rigid truck offers a 100-ton, 74.5-yd3 heaped capacity for each load.

From shift beginning to end, these trucks provide non-stop material transport, and Mineral Park limits the amount of downtime for items such as fueling. The company installed high-pressure fueling stations that allow the truck’s 336.8-gallon tank within a matter of minutes. “The trucks top off the tanks every six hours, and we’ll go through 1,000 gallons of fuel in 20 minutes and more than 4,000 gallons per shift,” said TenBrink.

To keep the mobile equipment operating at the mine’s targeted 85% availability, Mineral Park has a regimented preventative maintenance (PM) program. “Between the 15 trucks, four loading units and three drills, we perform 50 PMs a month,” said TenBrink.

A $1-million replacement part inventory also helps the mine maintain target availability rates. Jason Larkin, general manager for M.R. Tudor of Fontana, Calif., the Terex Construction distributor for the mine, explained this inventory level is required partially due to the mine’s remote location. With Las Vegas being the closest major city at more than 100 miles away, “very few equipment suppliers paid attention to the mine when it was smaller,” said Larkin, who helped source parts and provides warranty work, rebuild services and training on behalf of Terex.

Beyond the strict PM programs and maintaining a high replacement part inventory level, slowing the maximum hauling speed is one of the most beneficial practices implemented by the mine to achieve targeted truck availability rates. This also helps Mineral Park to extend truck life expectancy from 60,000 hours to approximately 80,000 hours.

“Before, truck operators were delivering their loads as quickly as possible at speeds reaching 35 mph, but they would then wait in line for their next load,” said Robert Franklin, regional sales manager for Terex Construction. “Reducing the maximum speed limit to 25 mph allowed operators to efficiently deliver their loads while reducing their wait times for the loaders. Additionally, by lowering the maximum speed limit, there was less wear and tear on the trucks and less fuel consumed each hour.”

At the surface, it seems counterintuitive that slowing down a truck would benefit a mine. However, one large gold mine in the United States studied the effects of reducing truck speed at its operation and found it actually helped to increase profitability. “Slower speeds help improve the life and reliability of the drivetrain, engine and tires, and it helps to save fuel,” said Steven King, area service manager for Terex Construction.

By improving reliability and truck availability, taking it easy on the trucks can increase the tonnage of material being produced each day. “It can mean the difference between a truck delivering loads all 12 hours of the shift rather than deliver for 8 hours and be down for maintenance the rest of the shift,” said King. Each shift a truck is not available at Mineral Park equates to roughly 3,500 tons less material moved.

As Phase II comes online in 2011, even more demands will be placed on the operating efficiency of the equipment, especially the rigid haul trucks. The additional crushing, mill and flotation equipment means the potential exists to double production. However, the supporting equipment must be available and running efficiently to meet target production goals of 50,000 crusher-feed tons per day. 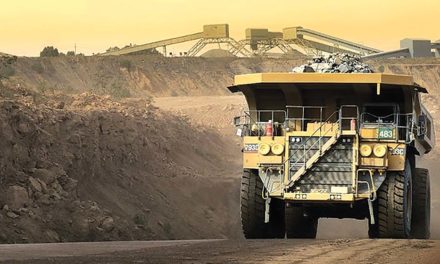 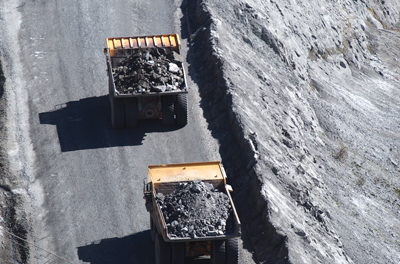 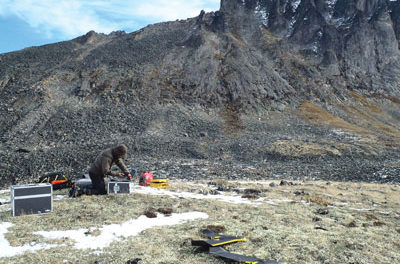