Mine Master recently told E&MJ that it will introduce a new, innovative bolting equipment solution for roof support, designed especially for the Chilean market, at the upcoming EXPOMIN trade show in Chile.

The new Roof Master 2.3 bolter emerged from a cooperative effort involving Mine Master, J.H Fletcher, HRI and the end user, Chilean copper producer Codelco. Its design allows the entire roof support process to be carried out by one machine in three steps: 1) drilling of bolt holes, 2) lining both side walls and roof with wire mesh (carried onboard in rolls) and 3) installing and cementing grouted bolts. This approach, according to Mine Master, offers significant reductions in time and cost along with operator safety improvements.

The bolter’s major features include:

With the new Roof Master 2.3 rig, the entire procedure can be performed with just one machine and two workers (operator and helper), reducing total work time to less than three hours. The principal advantage, according to the company, comes from the use of cement-grouted mechanical anchor bolts with expansion heads allowing for immediate installation of mesh, thus saving significant time.

The rig will be displayed at the HRI S.A. stand—Mine Master’s distributor in Chile—and visitors will be able to view a simulation of the rig working in a tunnel. 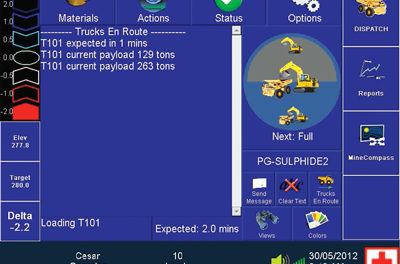