Sandvik Mining and Construction’s Australia Pacific regional group recently secured a contract to supply eight 60-metric-ton-capacity TH660 underground haul trucks and an LH621 LHD to Redpath Australia for its Mt. Lyell copper mine on the west coast of Tasmania. Mt. Lyell is owned by Vedanta Resources, one of India’s largest mining companies, and is operated by its Australian subsidiary Copper Mines of Tasmania.

In late 2010, Redpath Australia won the tender to provide all activities required to sustain a mine production of 2.7 million mt/y, said Rob Nichols, Redpath’s CEO. “[We] chose Sandvik’s 60 ton trucks for their haulage application, operator comfort and competitive pricing,” he said. “We were also interested in the support Sandvik could provide with operator training, service technicians and its commitment to spare parts provision.

“In addition, utilizing the TH660s has given us an opportunity to achieve lower costs than with the previous fleet,” he said.

According to Tim Redmond, Sandvik’s sales and marketing manager-underground mining, the equipment is in for a tough life.

“Mt. Lyell is a 100-year-old operation which poses some unique challenges for a modern trucking fleet, with some parts of the layout quite tight,” said Redmond. “In a more recent development you would probably be dumping into a crusher and then transport out by conveyor, but in this operation Redpath Mining will be hauling most of the production to the surface.”

Seven of the trucks were delivered in late September, with the eighth truck and LHD due for delivery early in November.

“Redpath’s contract is for three years and typically trucks in that type of application will be operating 5,000 to 6,000 hours a year, depending on how hard they are working,” Redmond said. “Conditions are quite wet and corrosive so tough gear is required. Older mines are never quite right for mechanization—as opposed to a greenfield site, where mine layout and fleet can be matched. The TH660s are ideal for this type of application.”

With a load capacity of 60 mt, Sandvik says the TH660s can carry up to 20% more payload than other brands, while still able to work in the same drift and tunnel dimensions as conventional underground dump trucks with capacities of 50–55 mt.

“The TH660 is able to carry a full 60-ton payload of either ore and waste, using a standard tub configuration—and loading of the truck can be achieved without any special training for the LHD operators,” Redmond said.

According to Sandvik, an innovative chassis structure gives it a small turning radius, light weight and good driving characteristics. “We’ve been pleased with the market’s general acceptance of the TH660,” Redmond said. “When the truck first arrives on site, it’s not unusual for mine site personnel to comment on the apparent size of the unit, but when compared with other makes of underground articulated trucks of the same size or smaller capacity, the TH660 is actually shorter and narrower, and of similar height.

“We’ve also been able to prove that this truck has the ability to successfully maneuver in existing mining operations, where there are often concerns due to its perceived size,” said Redmond.

Although Redpath Mining will perform standard maintenance on its new Sandvik equipment, Sandvik Mining and Con-

struction will provide full product support, with expert personnel based on site. “We will be responsible for technical and operator training, and we will base qualified personnel on site seven days a week to support the operation,” he said. 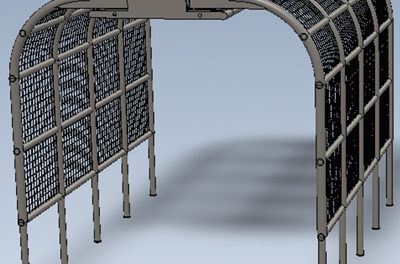