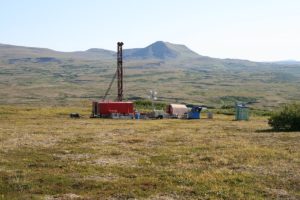 Northern Dynasty Minerals’ wholly owned subsidiary Pebble Limited Partnership and Tom Collier, the former chief executive officer of the Pebble Partnership, have each been served with a subpoena issued by the United States Attorney’s Office for the District of Alaska. The subpoena requests each to produce documents in connection with a grand jury investigation apparently involving previously disclosed recordings of private conversations regarding the Pebble Project.

The company said it and Collier intend to cooperate with the investigation and wasn’t aware of any charges filed against any entity or individual.

Collier stepped down from the company back in September after an environmental group released tapes that showed him making comments about his close relationship with elected and regulatory officials in Alaska.

Collier submitted a resignation letter to Northern Dynasty Minerals Ltd. and said his comments “embellished both his and Pebble Partnership’s relationships with elected officials and federal representatives in Alaska, including Gov. Dunleavy, Sens. [Lisa] Murkowski and [Dan] Sullivan and senior representatives of the U.S. Army Corps of Engineers.”

The videos, which were secretly recorded by individuals posing as investors, were released by the Environmental Investigation Agency and contained conversations with Collier and others with Northern Dynasty President and CEO Ron Thiessen.

In the videos, Collier described the governor as a friend and that he has had private dinners with him in his mansion in Juneau. “Like I said, we talk on a regular basis,” he said. He also said the governor’s chief of staff, Ben Stevens, served on the Pebble Advisory Committee prior to the governor taking office.

Comments were also made describing relationships with Murkowski and Sullivan and what both men believed to be support from them regarding the project. Thiessen also discussed Murkowski’s father, a former governor, who accompanied him and others to meet with Rio Tinto, BHP and Anglo American to invite them in on the project.

Northern Dynasty said the comments were “clearly offensive” to the political leaders mentioned, as well as other political, business and community leaders in Alaska.

In addition to comments about their relationships with political and regulatory officials, several comments were made regarding the size of the Pebble project and possibility of expansion.

Thiessen said the two actors posing as foreign investors on behalf of the Environmental Investigation Agency were trying to entrap the two executives into stating there is a defined plan to expand Pebble beyond the 20-year mine life currently being permitted. In this objective, he said, they failed.

Northern Dynasty’s principal asset is a 100% interest in a contiguous block of 2,402 mineral claims in southwest Alaska, including the Pebble deposit, located 200 miles from Anchorage and 125 miles from Bristol Bay.

Back in July, the U.S. Army Corps of Engineers published a final Environmental Impact Statement (EIS) for the proposed copper-gold-molybdenum silver-rhenium mine finding that Pebble would “not have measureable effects” on fish populations or fisheries in southwest Alaska. Despite this, the lead federal regulator published a record of decision on November 25 denying Pebble a key permit under the Clean Water Act on the grounds that its compensatory mitigation plan is non-compliant and the project is not in the public interest.

The Pebble Partnership submitted its request for an appeal to the Corps’ Pacific Ocean Division engineer in Hawaii on January 19 following the permitting decision. The Corps has 30 days from receipt to notify the Pebble Partnership as to whether its request to appeal is complete. Gov. Dunleavy announced that the Alaska Department of Law will also file an administrative appeal with the Corps. The appeal asked the Corps to remand the permit decision back to the Alaska District for a more thorough review.