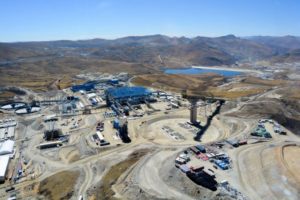 Stoppage at the Las Bambas mine (above) began on December 18. Production until then is estimated at 290,000 metric tons of copper in concentrate.

Roadblocks at MMG Ltd.’s Las Bambas mine in Peru have forced the company to suspend production. The disruption in transports began on December 3 on public roads in the Chumbivilcas province of Peru, 200 kilometers from the mine.

Ongoing dialogue between the company and Chumbivilcas communities has continued to be unsuccessful with no resolution reached to remove the roadblocks, resulting in the mine running out of critical consumables, according to MMG.

The company continues to request the immediate removal of the illegal roadblocks to facilitate transparent, open and constructive dialogue. MMG said it remains committed to working closely with the government of Peru and community members, to reach an agreement.

New Century Will Buy Goro Mine From Vale