Proposed site layout for the Magino gold project, estimated to cost about $356 million.

Argonaut Gold has reported the results of a pre-feasibility study (PFS) for its Magino open-pit gold project 40 km northeast of Wawa, Ontario. The study is based on a December 2013 probable reserve estimate of 60.2 million metric tons (mt) grading 0.90 g/mt and containing 1.75 million oz of gold. Project life is planned at 13 years, producing an average of 127,000 oz/y; however, production is planned to be substantially higher during the first seven years of operation, averaging 185,000 oz/y during that period.

Pre-production capital cost to develop the project is estimated at $356 million.

An important element of the planned Magino production schedule is an accelerated mining rate in years one to seven to access the highest-grade ore possible to feed the mill early in the project life. Low-grade ore mined and stockpiled in the early years will be processed later in the project life after the open pit is mined out in year eight.

The Magino PFS was completed by JDS Energy & Mining Inc., Vancouver, Canada. The study considered just 40% of a larger defined resource and did not include any potential expansion from the land or mineral rights acquisition pending from neighboring landowner Richmont Mines.

Argonaut is currently working with provincial and Canadian federal agencies to permit the project. 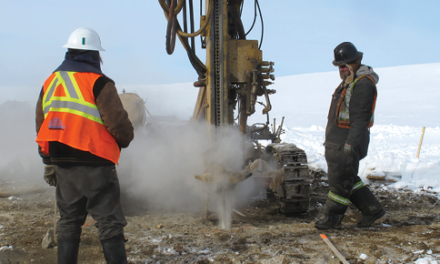