North American Palladium has budgeted C$79 million for capital investment in 2013 toward completion of Phase I of the ongoing expansion at its underground Lac des Iles mine in northern Ontario. The expansion is based on the upper third of reserves in the mine’s Offset Zone, which is currently being accessed via ramp from the older, shallower Roby Zone.

A shaft is being sunk on the Offset Zone that will allow transition to shaft production during the third quarter of 2013, allowing an increase in the underground mining rate at reduced cash costs/oz. The shaft is initially being sunk to the mine’s 825-m level. New mine levels are being completed, and mining stopes are being established.

Initial production through the shaft is planned at 3,500 mt/d. Should additional resources be converted to reserves, a second production platform could be established, potentially allowing the underground mining rate to increase to 5,500 mt/d.

Initial Offset Zone reserves total 7.7 million mt at a grade of 4.30 g/mt palladium, representing approximately 1.1 million oz of contained palladium. These reserves are all above the mine’s 990 level and represent only about one-third of the total Offset Zone measured and indicated resource. However, much of the infrastructure spend associated with developing these reserves is expected to be utilized for additional mining phases in the future.

North American Palladium believes there remains significant upside potential from continued exploration at the Lac des Iles property, where a number of surface and underground targets have been identified for follow-up drilling. The Offset Zone remains open to the west, south and at depth, and management is confident that further drilling has a high probability of finding more resources close to the new underground infrastructure.

North American Palladium Sells Gold Division: In other news, North American Palladium reported on March 22, 2013, that it had closed the sale of its Quebec-based gold division, NAP Quebec Mines Ltd., to Maudore Minerals Ltd. The sale includes the Vezza mine, the Sleeping Giant mine and mill complex, and a nearby portfolio of exploration properties.

The purchase price paid by Maudore consisted of C$18 million in cash and 1.5 million common shares of Maudore, which shares are listed for trading on the TSX Venture Exchange. North American Palladium intends to use the net proceeds from the sale to fund the mine expansion at Lac des Iles.

Maudore Chairman Kevin Tomlinson said, “The acquisition of the Sleeping Giant mill and tailings facility run by its highly skilled and experienced work force is truly the most transformative event in the history of our company. With new mining facilities and advanced stage exploration properties contiguous to our existing properties, we now have a total land package of 144,000 ha. This represents the first in a series of planned steps for Maudore to consolidate significant holdings in the prolific northern Abitibi region of Quebec and positions the company to become a leading Canadian gold producer capable of delivering shareholder value through the exploration, development and production of our properties.” 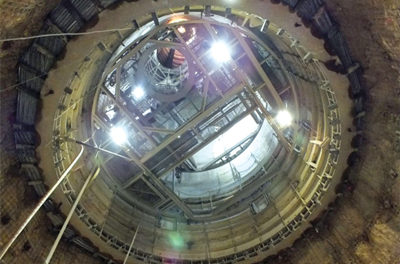