Midway Gold has awarded the EPCM (engineering, procurement, construction, management) contract for build-out of its Pan gold project 22 miles southeast of Eureka, Nevada, to Jacobs Engineering. Jacobs is also leading the detailed engineering for the project infrastructure. The majority of the overall engineering is complete.

The Pan project is based on a Carlin-style, epithermal, disseminated, sediment-hosted gold system. The gold mineralization occurs in elongate breccias along the Pan fault and along sedimentary bedding near unit contacts. The resource outcrops at the surface and is entirely oxide mineralization.

The deposit is ideally suited for open-pit mining and will require zero pre-strip. The life-of-mine strip ratio will be low at 1.8:1. Ore will be mined from two separate pits, north and south, with ore from both pits being processed on a central leach pad.

Grade distribution and metallurgical testing show that the ore can be processed by conventional heap leaching methods with an average estimated recovery of 75%.

“We are gaining momentum toward the construction of our first project,” said Ken Brunk, Midway president and CEO. “We have had a great working relationship with Jacobs throughout the detailed engineering process, and we are confident we will experience the same in construction management. Jacobs will manage construction of the leach pad, ponds, buildings, ADR plant and other mine-site infrastructure. They will provide the manpower and equipment needed during the construction phase as we assemble and ready the Midway team for operations.” 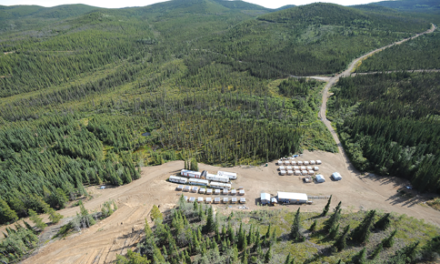 US Mining Fatalities in 2018 Were Second Lowest on Record