Imperial Metals began commissioning the mill and concentrator at its new Red Chris copper mine in northwest British Columbia in early February and trucked its first shipments of copper concentrate to the Port of Stewart, British Columbia, on February 27. The plant processed a little more than 193,000 metric tons (mt) in February and produced approximately 2,400 mt of copper concentrate. The plant has a designed throughput capacity of 30,000 mt/d.

Commissioning of the Red Chris flotation circuit with low-grade ore began on February 15. During the second week of startup, the mill feed grade was increased using ores from both the East and Main zones of the mine. The plant’s first full 12-hour operating shift without stoppage took place on February 22. The plant milled approximately 15,500 mt during the 12-hour period. 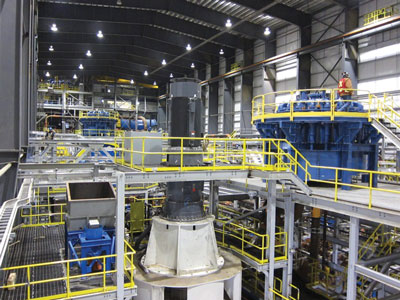 Red Chris is scheduled to produce an average of 123,000 mt/y of 27% copper concentrate over a mine life of 28.3 years. The mine’s production fleet includes a P&H 2800 electric cable shovel and CAT 793 haul trucks. Mining is initially from the East and Main zone pits, which will eventually form one large pit.

The company said that, as of early March, the Red Chris commissioning team was focused on achieving continuous operations and a consistent final concentrate grade. When satisfied with progress in these areas, they will place more emphasis on metal recoveries and throughput.