Augusta Resource Corp. reported in mid-August that its wholly owned subsidiary, Rosemont Copper Co., together with its joint-venture partners, LG International Corp. and Korea Resources Corp., have executed a project financing mandate letter with a syndicate of 12 international financial institutions that describes the activities needed to arrange a limited recourse loan facility for the construction of the company’s Rosemont copper project 50 km southeast of Tucson, Arizona.

The proposed senior secured loan is expected to provide all of the debt required for Rosemont, including a cost-overrun component. Development time for the Rosemont project is estimated at 22 months. Total initial capital cost for construction, commissioning and mine pre-development is estimated at $1.226 billion.

The Rosemont deposit is a large-tonnage, skarn-hosted, porphyry-intruded, copper-molybdenum deposit that is amenable to open-pit mining. The sulphide ore will be processed by crushing, grinding, and flotation to produce separate copper and molybdenum concentrates.

The project’s 2012 feasibility study calls for concentrator throughput for the first four years of production to average 75,000 st/d, ramping up to 90,000 st/d for the second half of a mine life that is estimated at more than 21 years.

Production of copper in concentrates will average about 243 million lb/y over the life of the mine. 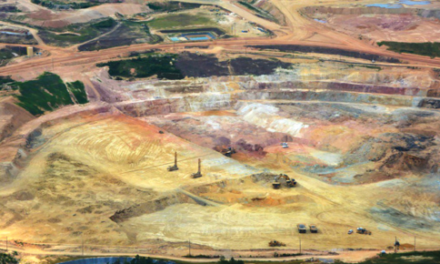