Coeur Mining has announced an updated and re-scoped mine plan and a preliminary economic assessment for its Kensington gold mine in southeast Alaska. The new plan incorporates mineralization from the recently discovered, high-grade Jualin zone and indicates higher overall production and significantly higher cash flows due to the contribution of higher-grade material from three nearby zones.

The Jualin zone is located approximately 8,250 ft from current mining activities and continues to expand based on ongoing drilling. The zone has an average gold grade more than three times the average Kensington reserve grade of 0.185 oz/st.

The new Kensington mine plan includes driving a decline to the Jualin zone and new underground mine development. The plan incorporates a portion of Jualin’s estimated inferred mineral resources, which Coeur expects to upgrade to measured and indicated resources and convert to reserves through a $9.1-million drilling program over the next two years. This program includes 44,000 ft of drilling from the 3,000 ft of planned mine development at Jualin.

Drill results to date suggest considerable upside exists to increase the size of the overall Jualin zone and bring additional high-margin production into the mine plan as drilling continues.

Spending for underground mine development at Jualin is expected to average $16 million per year through 2018, when production is expected to be fully ramped up. Development of the Jualin decline is planned to begin in July, with initial production expected in mid-2017 at a mining rate of approximately 250 st/d. Production is then scheduled to increase to 500 st/d in early 2018, when it will represent approximately 27% of the average daily feed to the Kensington mill.

“Our recent success in identifying high-grade mineralization near existing Kensington infrastructure has added higher-margin production to our mine plan and significantly improved the expected economics of the mine,” Coeur president and CEO Mitchell J. Krebs said. “Importantly, the required capital to place Jualin into production is estimated to be $30 million and has an expected rate of return of around 70%.

“Incorporating a portion of expected production from Kensington’s high-grade zones and the Jualin orebody into the Kensington mine plan has quadrupled our expected net cash flow at Kensington through 2022, and we believe considerable upside exists based on recent drill results. Through continued drilling, our goal is to expand these sources of high-grade resources and extend the 2018 profile.” 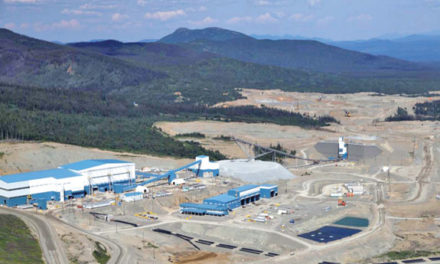