In January 2010, BHP Billiton announced corporate approval for $240 million in early-stage capital expenditures at its Jansen potash project in Saskatchewan and, in a separate announcement, that it had entered into a definitive agreement to acquire Athabasca Potash Inc. for about $320 million. Athabasca Potash’s Burr project is located adjacent to the Jansen project. The Jansen project is in the final stages of a pre-feasibility study, and BHP Billiton expects to move into the feasibility phase in mid-2010, with a full investment decision anticipated in late 2011.
The Jansen project is being developed as an underground potash mine in east-central Saskatchewan, 140 km east of Saskatoon. In October 2009, BHP Billiton received “Project Specific Guidelines” from Saskatchewan Environment and Resource Management for the submission of an environmental impact statement.

The Jansen project is being designed to produce about 8 million mt/y of agricultural-grade potash and is BHP Billiton’s first potash project. Current funding will be used to start ground freezing required to allow safe and effective shaft sinking and to complete detailed engineering, equipment and materials commitments, and other elements that will allow shaft sinking to begin once full environmental permits are in place, anticipated in mid-2011.

A project area of 780 km2 had been defined for the Jansen project prior to the announcement of the planned acquisition of Athabasca Potash. This area is being targeted for development of surface facilities. Subsurface development will occur within a larger area where BHP Billiton has mineral exploration rights. In parallel with the Jansen project, BHP Billiton is also pursuing its Boulder and Young greenfield potash projects in Saskatchewan, as well as advancing work on logistics and a port.

Athabasca Potash holds potash exploration permits covering about 6,900 km2. The company has been advancing a prefeasibility study for development of a 2-million mt/y underground mine at its Burr project, along with an order-of-magnitude evaluation of potential production of 3 million to 4 million mt/y.

Acquisition of Athabasca Potash by BHP Billiton remained subject to approval of two-thirds of the votes cast by Athabasca’s security holders and a simple majority of the votes cast by its shareholders at a special meeting planned to take place in March 2010. The acquisition also required court approval. BHP Billiton had a right to match any competing superior offer. The companies were anticipating closure of the transaction before the end of March 2010. 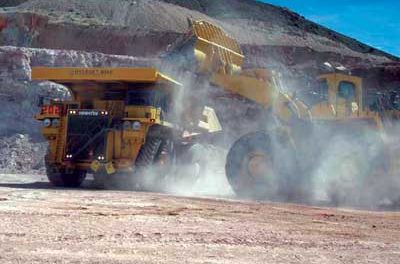 Santa Fe Gold Will Recommission Billali Mine to Boost Production