In its earning report for the first half of 2014, Rio Tinto said it increased earnings by 21% to $5.1 billion. Since 2012, the company has achieved $3.2 billion in sustainable operating cash cost improvements, exceeding its $3 billion reduction target six months ahead of schedule. Momentum in cost reductions is now expected to realize a further $1 billion of savings by the end of 2015. The company set production records for iron ore and reported a strong operational performance in copper during the first half of 2014.

“Our outstanding half year performance reflects the quality of our world-class assets, our program of operational excellence and our ability to drive performance during a period of weaker prices,” said Rio Tinto chief executive Sam Walsh. “We delivered what we said we would, exceeding our operating cash cost reduction target six months ahead of schedule while producing record volumes and driving productivity improvements across all our businesses.”

Iron ore production from Rio Tinto mines grew to a record level 139.5 million metric tons (Rio Tinto share 109.9 million mt). Rio Tinto achieved a full ramp-up of its Pilbara iron ore expansion to 290 million metric tons per year (mt/y) in May, two months ahead of schedule. The company reported the Pilbara’s lowest cash costs ($20.40/mt), against an average realized iron ore price of $99/mt wet. The rail duplication and track work required for the 360 million mt/y expansion is now complete. The port infrastructure to support it is on track for anticipated completion by the end of the first half of 2015.

For the first half, Rio Tinto produced 170 million mt of copper compared to 136 million mt during the same period in 2013. The higher copper volumes were attributed to improving grades and concentrator recoveries at Kennecott Utah Copper and the ramp-up at Oyu Tolgoi. Sales exceeded production at Oyu Tolgoi as logistics commissioning issues were resolved, enabling a strong acceleration in shipments. 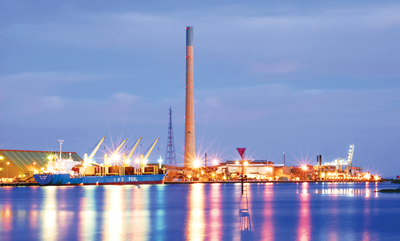