The fate of three missing miners who disappeared following a ground collapse more than two weeks ago at Lily gold mine in South Africa remains uncertain, as rescuers seek to stabilize the site before continuing efforts to get to them.

On February 5, a surface crown pillar collapsed trapping 87 workers inside the mine. At the same time, a container on the surface converted into an office was swallowed by a resultant sinkhole. The mineworkers were soon freed without loss of life or significant injury, but three clerical employees remain trapped in the container now 80 m below ground.

Lily is owned by Australian firm Vantage Gold and is located in Mpumalanga province, east of Johannesburg. Rescue efforts were halted about a week in after subsequent falls of ground made the site unsafe.

Management now plans an operation similar to what was used to rescue 33 Chilean miners in 2010, using a drill to create a rescue shaft to where the container is thought to be.

“The drill rig is capable of drilling a 660-mm-diameter hole, which will allow access to Level 5,” the company said in a statement.

However, it will be at least three weeks before the site is stable enough to proceed, the company warned.

Initial rescue efforts at one point came as close as 10 m to the trapped container, and signs of life were detected. Since then, the container has slid further into the sinkhole and contact was lost.

The three, Pretty Nkambula, Solomon Nyerende Yvonne Mnisi are, however, without food or water, and the availability of oxygen is uncertain.

The accident comes at a time when the South African mining industry has achieved its lowest casualty rate in decades — 75 miners were killed last year, out of a workforce of close to half a million people. 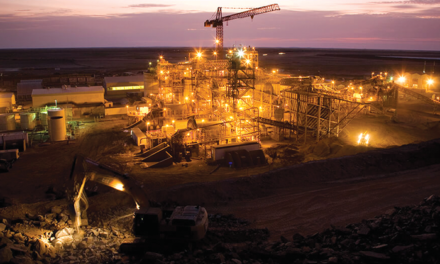 Kinross Proceeding With Phase One of Tasiast Expansion

BHP to Sell EKATI Diamond Mine