Nyrstar has completed a smelting strategic review (SSR) of its metals processing operations and a pre-feasibility study of proposed redevelopment of its Port Pirie primary lead smelter in South Australia, Australia. The company’s metals processing operations, in addition to the lead smelter, include zinc smelters in Auby, France; Balen, Belgium; Budel, the Netherlands; and Hobart, Australia; and a zinc refinery in Clarksville, Tennessee, United States.

The SSR has identified an attractive portfolio of investments in multi-metals recovery and an overall “Metals Processing Transformation” blueprint, Nyrstar reported. The redevelopment of the Port Pirie lead smelter into an advanced poly-metallic processing and recovery center capable of processing a wider range of high-margin metal-bearing feed materials is expected to fundamentally transform the site’s operating and business model. The Port Pirie pre-feasibility study has confirmed the technical and environmental feasibility of the redevelopment. 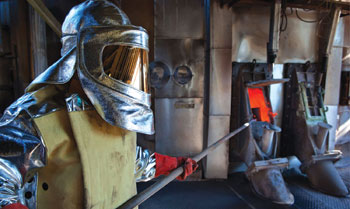 Lead and zinc producer Nyrstar, after determining that its mining and smelting assets provide a “unique opportunity to capture non-realized value and deliver its strategic mission,” will embark on a 25-project, €280 million “Metals Transformation Project” starting in early 2014. (Photo courtesy of Nystar)

Nyrstar commented that its mining and smelting assets provide a “unique opportunity to capture non-realized value and deliver its strategic mission.”

According to the company, the SSR systematically challenged how it views and operates its smelters and smelting network. Thousands of scenarios were modeled using different technologies, feed mixes, macroeconomic parameters, and capacities to arrive at a final transformation blueprint. Significant non-realized value was identified in feed material that Nyrstar controls via the concentrates its mines produce, the residues its zinc smelters produce, and historical ponds at the smelters.

The 25 projects in the transformation blueprint include debottlenecking of smelters, building fuming capacity, and enhancing minor metals recovery. No single investment will exceed €50 million. A sequencing of investments starting in early 2014 could result in incremental earnings starting to be generated in late 2014, with the full transformation to be completed by early 2017.

Nyrstar’s first investment into the transformation will be the purchase of ERAS Metal, the owner of a fuming plant in Hoyanger, Norway, which Nyrstar has agreed to acquire for approximately €5 million. Nyrstar will invest an additional €2 million to upgrade the plant to process alternate valuable feed materials such as Nyrstar smelter residues and pond materials.

The Port Pirie pre-feasibility study has confirmed the technical feasibility of a new oxidation furnace to replace the existing sinter plant, which will enable the processing of Nyrstar’s zinc smelter residues and an increased range of other metal-bearing feed materials. Replacement of the sinter plant will also significantly reduce airborne lead emissions at the site.

Nyrstar is proceeding with a final feasibility study of the Port Pirie redevelopment project, with a report due to the company’s board in the first quarter of 2014. Construction is currently proposed to take place during 2014 and 2015, with commissioning in first quarter of 2016.