The second phase of Hudbay’s Lalor mine in Manitoba achieved commercial production at the end of the third quarter, having hoisted in excess of 60% of the monthly average of planned ore to be hoisted up the production shaft over a 1-year period during the month of September.

Of the total mine construction budget of $441 million, Hudbay has invested approximately $413 million and entered into an additional approximately $26 million in commitments to September 30. Major items to be completed include the installation of the surface exhaust fans and the construction of an office and change house complex. This work is expected to be completed in the fourth quarter of 2014.

In the third quarter of 2014, Lalor mined 158,861 metric tons (mt) of ore at a copper grade of 0.72% and a zinc grade of 8.91% from a combination of ore development, cut and fill, and longhole stope mining. A total of 88,391 mt of ore were hoisted up Hudbay’s main production shaft following its commissioning in August. Hudbay has also commissioned the refurbished Snow Lake concentrator, which now has the capacity to treat 2,700 mt/d.

The Constancia project in Peru is approximately 94% complete at the end of September; first concentrate production is expected during the fourth quarter of 2014 and commercial production expected to be achieved during the second quarter of 2015. The acquisition of Augusta Resource Corp. and its Rosemont copper project in Arizona has been completed.

Kinross Reaches an Agreement at Maricunga 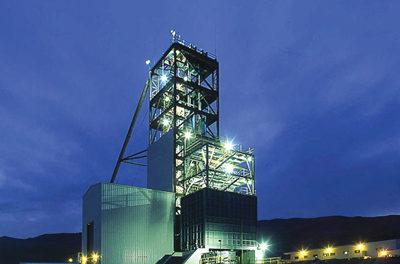 FLSmidth Awarded First Phase of EPC Contract for Gold Mine