As contaminated wastewater released from the Gold King mine in Colorado approaches Lake Powell, Utah, U.S. Environmental Protection Agency (EPA) Administrator Gina McCarthy visited the site of one of the worst environmental disasters, which it created. “While we continue to investigate the root causes of last week’s release of mining waste at the Gold King mine in Colorado, we are instructing our regions to immediately cease any field investigation work at mines including tailings facilities, unless there is imminent risk in a specific case,” McCarthy said. 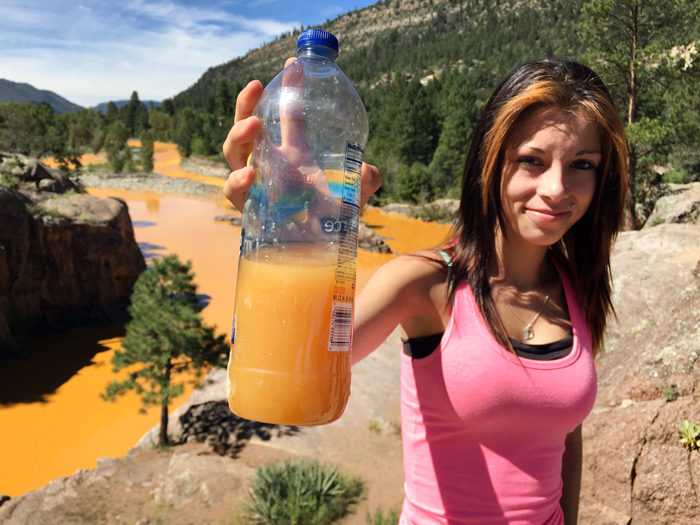 Rayna Willhite holds a bottle of water she collected form the Animas River north of Durango Colorado, on Thursday, August 6th, 2015. About 3 million gallons of toxic mine waste emptied out of the Gold King Mine north of Silverton that eventually made it into the Animas River. (Jerry McBride/Durango Herald via AP)

Working with heavy equipment near the portal of the abandoned Gold King mine, located near Durango, a contractor working for the EPA, which has now been identified ironically as Environmental Restoration, pierced a pocket of water and released it into Cement Creek, a tributary of the Animas River. The agency failed to warn local residents in a timely fashion, and when it finally acknowledged the spill, it under estimated the initial release at 1 million gallons.

After the initial surge, water was still discharging from the portal at a rate of approximately 500 gpm. The contractors had managed to construct a set of crude settling ponds to treat the drainage before it entered Cement Creek. The discharge appears to be slowing and treatment appears to be effective, according to the EPA.

People living downstream were not amused. The Animas River merges with the San Juan River in Farmington, New Mexico. The San Juan River flows in Utah where it meets the Colorado River at Lake Powell. EPA said its Region 8 had deployed a large response team to Durango and Silverton, Colorado, and to several locations in New Mexico, Utah and the Navajo Reservation to coordinate with affected states, tribes and communities on various response activities and to address the impacts.

Aerial and ground reconnaissance indicates that the mustard yellow plume associated with the spill has dissipated downstream, and there is no leading edge of contamination visible. The breach occurred at 10:30 a.m. on August 4. The original spill is now believed to be 3 million gallons, three times larger than originally estimated. The U.S. Bureau of Land Management is cautioning people to avoid the San Juan. The leading edge of the polluted water was expected to reach Lake Powell on Friday, August 14.

If a mining company had caused this incident, the company would face an all-out assault by environmental activists and multiple citations from the EPA and other regulatory agencies. The rules regarding liability for the EPA and its contractor, however, are different.

“Where EPA contactors have made such mistakes in the past, courts have held them liable for any additional remediation required by such actions despite statutory immunity provisions,” said Thaddeus Lightfoot, a partner at Dorsey & Whitney who has nearly three decades experience practicing environmental law.

All of these metals are hazardous substances under the federal Superfund statute, the Comprehensive Environmental Response, Compensation and Liability Act of 1980 (CERCLA). Yet, the Gold King mine was not registered as a Superfund site.

“Typically, cleanup contractors are not liable for cleanup costs as ‘operators’ of a site under CERCLA if they are cleaning up pre-existing conditions, such as the existing contamination in the sludge near Durango. But if the cleanup contactor causes a release of pre-existing contamination during the course of the cleanup — a so-called ‘second release,’ which appears to have occurred here — the immunity does not apply,” Lightfoot said. 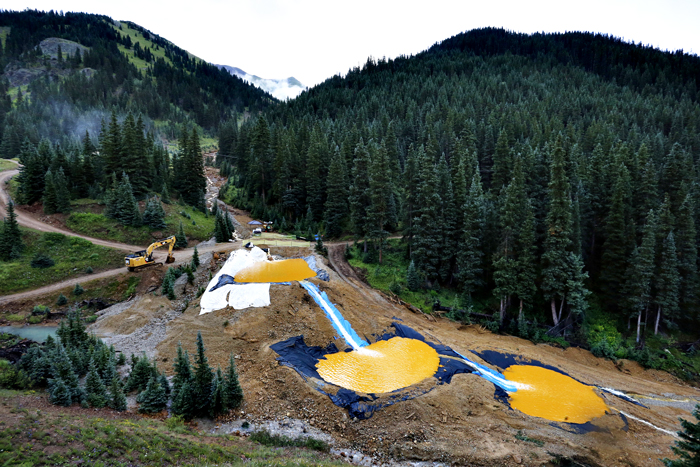 Water flows through a series of retention ponds built to contain and filter out heavy metals and chemicals from the Gold King mine wastewater accident, in the spillway about 1/4 mile downstream from the mine, outside Silverton, Colorado., Wednesday, August 12, 2015. (AP Photo/Brennan Linsley)

2 Dams Collapse at Iron Ore Mine in Brazil, Flood Villages