The main decline reached its planned lowest elevation and the last of the ventilation exhaust raises, equipped with tubular man-ways, are nearly complete. Juniper anticipates that its manpower will now focus solely on ore production.

Approximately 6,000 metric tons (mt) of Golden Chest material was delivered to the New Jersey Mill in April as milling operations continue to ramp up smoothly toward capacity production, forecast at about 7,500 mt per month. The mill has produced more than 320 mt of gold concentrate through the end of April.

Proceeds from concentrate sales accrue to Gold Hill Reclamation and Mining Inc., the lessee of the Skookum Shoot portion of the Golden Chest mine. NJMC processes Golden Chest ore at its New Jersey Mill, earning cash from milling fees and its share of a 2% NSR royalty on gold production.

Head grades to date averaged 4.85 grams/mt (g/mt) with recoveries averaging 93.3%. Going forward, head grades are expected to increase as mine development has reached the main orebody. The stopes mined thus far were atop the main Skookum Shoot orebody, near the extremity of the oreshoot.

The main Skookum Shoot orebody remains open down-dip, which is included in the area leased to Gold Hill. Substantial exploration potential remains at the Golden Chest, in areas not subject to the Skookum lease, including the Skookum up-dip, on-strike extensions such as the Paymaster zone, and in areas of past exploration and historic production, north of the Skookum lease. 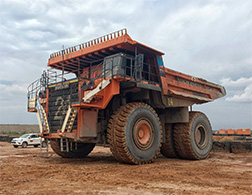 MTU Wins Service Agreement at Lumwana Mine in Zambia